No, John Gruber, Apple did not 'basically invent' USB-C 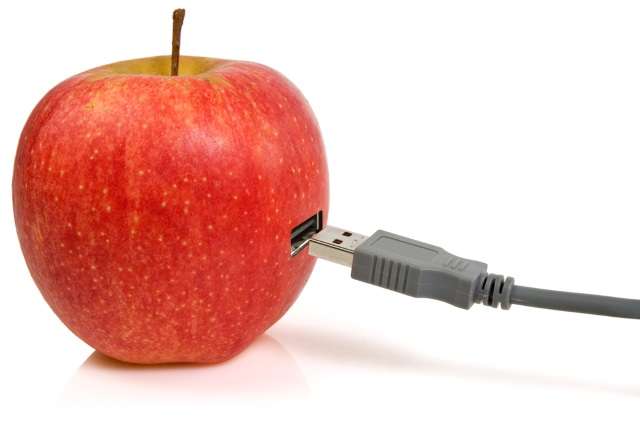 Two computers of note have been announced or released in recent days -- the 2015 version of the Chromebook Pixel and the redesigned MacBook -- that feature an all-singing, all-dancing USB-C port. It transfers data, it powers, it makes coffee, it doesn't matter which way round you insert it, and it practically guarantees an orgasm (OK... maybe we got a little carried away).

It’s a progression of USB technology, and one that has been well-received, at least in principle. Who could be responsible for this marvellous technology feat of design? Blogger, Markdown inventor, and owner of Daring Fireball, John Gruber seems to be under the impression that it's an Apple invention. But he's wrong.

In a recent podcast (jump to the 54 minute mark to hear the section we're interested in), Gruber said: "I have heard -- I can’t say who but let's call them informed little birdies -- that USB-C is an Apple invention and that they gave it to the standards bodies … and that the politics of such is that they can't really say that. They’re not going to come out in public and say that but that they did. It is an Apple invention and they want it to become a standard".

What I've heard is that it's an Apple invention that was sort of developed alongside Lightning and that they donated, they gave to the standards bodies because they want the industry standard to be thin enough for their devices and they want it to be reversible.

Sorry, to burst your bubble, John, but what you've heard simply isn’t true. You might love Apple, but you can just ascribe inventions to the company. Tacking on the caveat "the politics of such is that they can't really say that" is a bit of a cop out. We could say anything we wanted and tack that on the end of the sentence to cover our asses.

Sadly, it's an idea that's now out there. It has been picked up by the likes of Macrumors, TheTechBlock, and Cult of Mac (but of course) and is already well on its way to becoming an actual part of Apple's history. Repeat something enough, and people will eventually start to think it's true. This is very much what has happened here.

We got in touch with the USB Implementers Forum for clarification. A spokesperson explained that the "USB Type-C Cable and Connector Specification was developed by the USB 3.0 Promoter Group". A full list of contributors to the project can be found in the Universal Serial Bus Revision 3.1 Specification. Skip to page 10 of the USB Type-C Specification Release 1.0 document and you will indeed see that Apple is listed. But so is ACON. And Advanced Micro Devices. And Agilent Technologies Inc. And Cypress Semiconductor, Foxconn, Google, HP, Intel, Lenovo, Nokia, Microsoft, Samsung, Seagate, VIA and many more. Just about every name under the tech sun in fact.

So what are you going on about, Gruber? He has since clarified his position a little:

My comments on The Talk Show about Apple's role in the creation of USB-C were somewhat hyperbolic. It was a brief aside. I certainly didn't mean to imply that no other companies contributed to the final spec. Only that from what I've been told, Apple ought to be getting (and taking) credit as the leading company behind USB-C's innovations. Not that they "invented" it, but that they "basically invented" it. I completely stand by that. But there are a lot of politics involved. One reason Apple isn’t taking more public credit for their role: they truly want USB-C to see widespread adoption; a perception that it’s an Apple technology might slow that down.

I'll also point out that USB-C is a very Apple-like design. It is reversible and thin; because it can handle power, high-speed data transfer, and video, it (obviously, given the new MacBook) allows for a significant reduction in ports on a laptop. Every aspect of USB-C fits Apple's design goals. You can't say that about any previous USB port.

So what if the design of USB-C is very Apple-like? There are Samsung cables that could be described as being very Apple-like. This doesn't mean that the company invented them. Apple does have patent for a reversible USB connector (specifically a Reversible USB Connector with Compliant Member to Spread Stress and Increase Contact Normal Force), but this is different to USB-C. In fact it is more like a traditional Type A USB connector with a couple of tweaks.

Being involved in a project with dozens of other companies -- Apple engineers are outnumbered many, many times over by those from other companies -- is in no way the same as inventing the technology at the heart of the project. What does "basically invented" mean? Nothing essentially. It's something that could be said of any other company or engineer involved in the specification.

"Every aspect of USB-C fits Apple's design goals"? So what? It fits the design goals of lots of other companies too -- that's why it is an official specification adopted by and contributed to by many companies rather than a weird proprietary connector.

There's nothing wrong with loving Apple, John, but don't ascribe things to the company without justification. USB-C was a collaborative effort; it is not Apple's baby.

34 Responses to No, John Gruber, Apple did not 'basically invent' USB-C