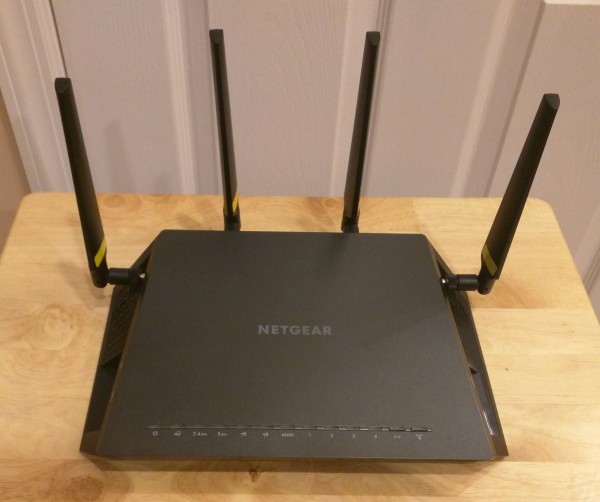 For many of us, connecting to the Internet is life. While technically not as important as drinking water or breathing oxygen, being connected can feel that way sometimes. It is for this reason that I am often perplexed that people choose to skimp on their router. Look, I like a good deal just as much as the next guy, but why wouldn't you go for the best you can get when it comes to something you do every day, such as connect the Internet? Is it really worth saving $20 if your connection is constantly dropping?

For the past year or so, I have been enjoying Apple's Airport Extreme router, and for the most part, it has been a success. Unfortunately, it has some negatives. Lately, the 5GHz band has become flaky, causing me to disconnect and reconnect; a pain in the butt to the say the least. The biggest deal-breaker? It requires an Apple device or Windows computer to manage. Unlike most routers that can be accessed though a web browser, Apple requires a special program. As a Linux user, this meant not having the ability to change router settings without booting into Windows or grabbing my iPad. To solve this dilemma, I swapped it for the 802.11AC Netgear AC2350 Nighthawk X4 Smart WiFi Router. Did it outperform Apple's Airport Extreme?

Once unboxed, I brought the assembled router to my living room. I removed the Apple Airport Extreme, and replaced it with the Netgear router. It's new home is behind the television on my TV stand.  At first, I was worried that the large antennas would be too conspicuous, but my worrying was for naught; it looks classy. While Apple's router has a more conservative design, its bright white exterior makes it stand out.

Unfortunately, once powered on, I noticed the flashing lights on the front of the Nighthawk X4 were very bright and obnoxious. This became distracting when trying to watch TV. Luckily, Netgear planned for this and included a switch on the rear to turn the lights off. This made the router perfect for my living room. 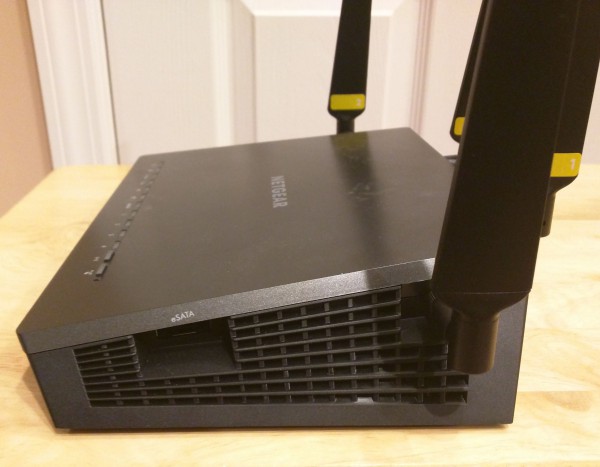 To set up the router, I had two options; use the included CD-ROM on Windows, or connect with a modern web browser. If you are a beginner at setting up a router, you may want to use the CD, but I opted for the browser-based solution.

Wirelessly connecting to the router was rather simple; I selected the Netgear SSID and was prompted for a password. But wait, I am only setting this up for the first time, what is the password? Netgear wisely secures the router out of the box and puts a unique password sticker on the bottom of it. This is a smart design choice, as it lessens the chance of having an open router for the neighborhood to use.

Once connected to the router, I visited http://192.168.1.1 with Firefox and was prompted for a username and password. By default, it is admin/password, but you should change this later. The first thing I did was set a unique SSID and changed the default Wi-Fi password. Even though the password that ships with the router is unique, it is still a best practice to change it. 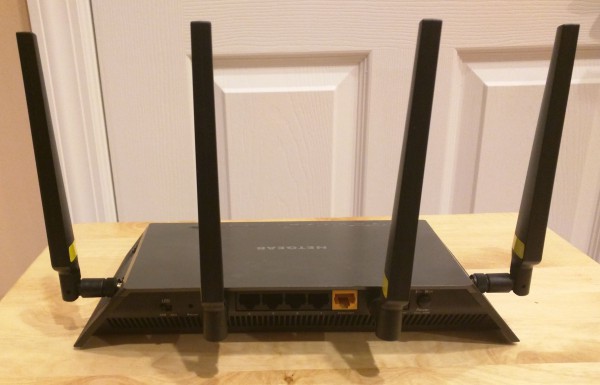 The next thing I did was update the firmware. This is another best practice, as outdated firmware can have weaknesses in it. Installing the latest firmware can make your router more secure. Security aside, the update can also, in theory, improve performance and fix bugs. With that said, updated firmware can, of course, introduce bugs too. Still, staying current is my recommendation.

I also enabled Google's Public DNS by setting the DNS servers as 8.8.8.8 and 8.8.4.4. By doing this on the router, you will not have to do it on each connected device individually. You can read more about Google Public DNS here.

With the router now in a proper configuration, it was time to begin using it. All of the devices in my home connect wirelessly, with the exception of my TiVo and Blu-Ray player, which are wired in. My house has two floors and a basement, with the router being on floor one. Computers and devices are in use on all floors, so by putting it on floor one, it is, give or take, in the center of the house.

I am happy to say that I have strong signal throughout my home. In every room, I can achieve 60Mbps/30Mbps, which essentially saturates my Internet connection. I know what you are thinking; the 802.11AC router is rated as 600Mbps on 2.4GHz and 1733 Mbps on 5GHz, so why is your speed so low? No matter your router's capability, it cannot exceed your Internet connection. Where it can make a difference, however, is transferring files or streaming video on your own network between two devices.

If you are like me, and using the router only for connecting to the Internet, then the router's rating is admittedly overkill. With that said, there is no downside to having a router that is faster than your Internet connection. 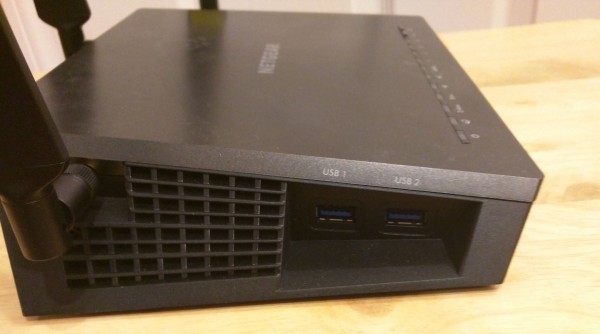 The Netgear R7500 Nighthawk X4 is very fast, but I'm sure you knew that already. Heck, most routers are "fast", even the cheap ones. Where it truly shines is stability, range and design.

Stability is my most desired feature, and Netgear's offering does not disappoint. Nothing is worse than dropped connections and needing to reboot a router. The Nighthawk X4 has never once needed a reboot or dropped a connection. By comparison, Apple's 5GHz bands would often drop or disappear; Netgear's router has no such problem. The 1.4GHz dual core processor is wonderful.

Range is also important to me, as my house, while hardly a mansion, is fairly large, and I do not want any compromises in any room. The Nighthawk X4 meets and exceeds my needs, offering a strong signal well into my back and front yards. This summer, I may have to sunbathe with my laptop; advanced apologies to my neighbors. 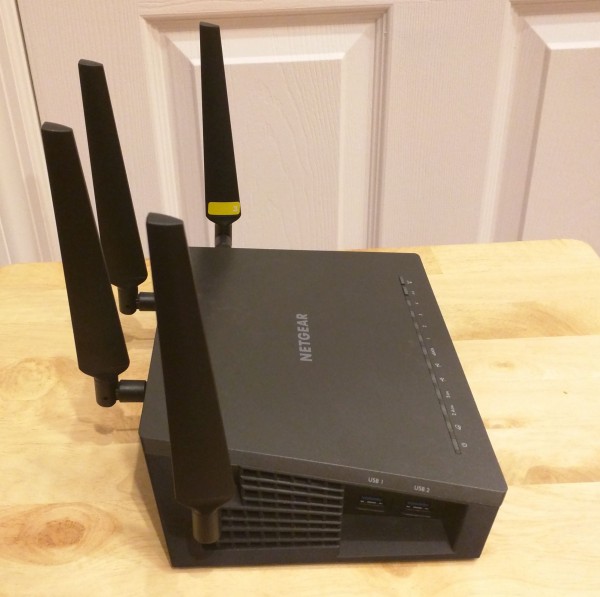 The design, however, is what makes it stand out. I have been simultaneously testing a few routers, including Netgear's more expensive Nighthawk X6, and I prefer the X4. The quad-antenna router has a more classic look and has removable and replaceable antennas. This is extremely important to me, as it means I can replace a broken antenna with ease, or even upgrade the antennas for better range.

Should you buy the Netgear R7500 Nighthawk X4 Smart WiFi Router AC2350? If you are in the market for a new router, absolutely. It is fast, has long range and most importantly, it is stable as heck. Plus, the USB 3.0 and eSata ports will enable you to connect printers and hard drives for easy sharing.

At $249, however, I can understand your potential trepidation in buying it. My reply is that you cannot put a price tag on a reliable Wi-Fi connection. Your wireless router is your gateway to the world, and nothing is more frustrating than a flaky model with dropped connections.

The speed and functionality of the Netgear R7500 Nighthawk X4 Smart WiFi Router AC2350 will make it a good choice for many years -- it will not need to be upgraded for quite some time. If you average the cost over the years of ownership, it is a great value. Highly recommended.

The Olympic Cyber Defense Games: How the Tokyo Olympic Games will fare keeping cyber attacks at bay while the world watches

Get 'Accountable Leaders: Inspire a Culture Where Everyone Steps Up, Takes Ownership, and Delivers Results' ($15 value) FREE for a limited time

Let's hear it for system administrators!