Disney's IT troubles go beyond H-1Bs 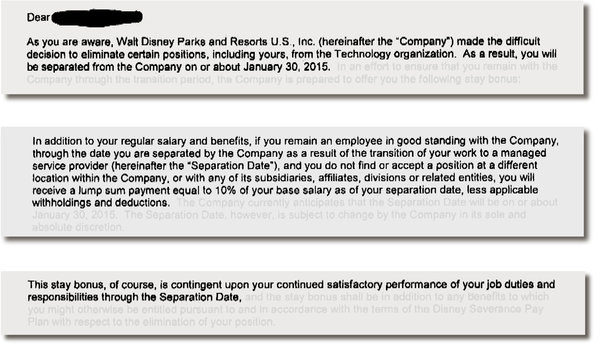 Disney has been in the news recently for firing its Orlando-based IT staff, replacing them with H-1B workers primarily from India, and making severance payments to those displaced workers dependent on the outgoing workers training their foreign replacements. I regret not jumping on this story earlier because I heard about it back in March, but an IT friend in Orlando (not from Disney) said it was old news so I didn’t follow-up. Well now I am following with what will eventually be three columns not just about this particular event but what it says about the US computer industry, which is not good.

First we need some context for this Disney event -- context that has not been provided in any of the accounts I have read so far. What we’re observing is a multi-step process.

Disney had its IT operation in-house, then hired IBM to take it over with the usual transfer of employees followed by layoffs as IBM cut costs to make a bigger profit. Ultimately Disney fired IBM, hired (or re-hired) a new IT staff, which is the group now replaced by H-1Bs employed by an Indian company essentially offering the same services that were earlier provided by IBM. This more detailed story means, for one thing, that the workers being replaced by H-1Bs have for the most part worked for Disney for less than three years.

So the image of some graybeard, now without a job, who had been working for Disney since the days of punched cards simply isn’t accurate. It probably also explains to some extent the Disney severance offer of 10 percent of each worker’s annual salary, which may well have been more than workers with so little seniority might have expected. It’s possible Disney was being generous.

But Disney was also being stupid. This is shown in part by its tone-deaf response to the story, which they clearly weren’t expecting or prepared for.

Some of this comes down to the difference between labor and people. Disney may have been trying to reduce labor costs but did so by dumping people. Journalists and readers get that, some executives and most economists don’t. These aren’t just numbers.

But in Disney’s specific case there’s another underlying issue that has to be taken into account, which is IT mis-management on an epic scale. I have been talking with IT folks I trust from Orlando -- both former Disney workers and others just familiar with the local tech scene -- and the picture of Disney IT that emerges is terrible.  Disney turned to IBM not so much to save money as to save IT. But as you can guess, an essentially un-managed IBM contract was viewed by Armonk as a blank check. Disney started complaining, but it is my understanding that at least some of the trouble had to do with Disney’s own communication problems -- problems that didn’t improve once IBM was fired.

"I remember there was a big crisis," recalled a former IBMer who worked on the Disney account. "There was a massive backlog of new service requests, hundreds. It turned out most of the service requests had already been processed and had been waiting on Disney for months, sometimes over a year, for approval. In the interim Disney had changed their request process. So we moved the finished requests to the new system. A few months later most of those requests were still awaiting Disney’s approval".

I blame Disney CEO Bob Iger for not knowing what’s happening at his own company, which I’m told now thinks that moving everything to the cloud is the answer. It isn’t. And with Disney such an iconic brand I’m quite sure there are technical people in Russia, China, North Korea and elsewhere who know very well the company’s vulnerability.