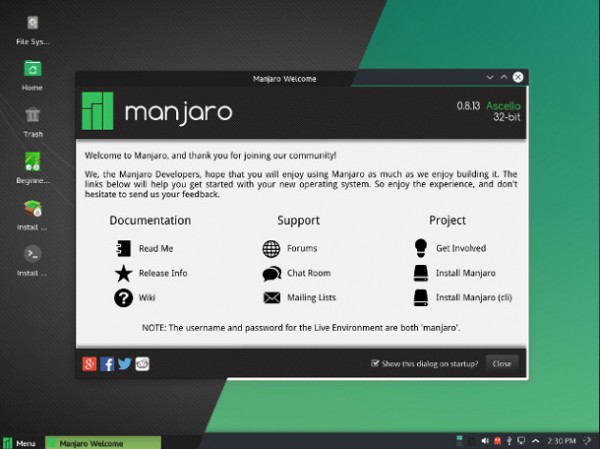 If you are a Linux desktop user, you probably have a favorite distribution. Sticking to one distro is a good option, as it is generally less stressful and easier to master. With that said, however, some people are distro hoppers; constantly trying new Linux-based operating systems. This can be fun too, but the downside is that you are in a constant state of change -- a solid foundation has its benefits.

There are pros and cons to both practices, but I would suggest a happy medium; stick with the operating system you love, but try other ones -- on the side -- to remain knowledgeable on the state of the Linux community. One such distro I suggest trying -- on a VM or separate partition -- is Manjaro. Hell, if you like the Arch-based OS, you may just commit to it full time. Today, the newest version, 0.8.13, sees release, featuring two of the best desktop environments -- XFCE 4.12 and KDE Plasma 5.3.1.

The most notable improvements to Manjaro 0.8.13 are a ton of fixes to the installer, called "Thus". The coolest of these changes is the ability to install Manjaro to SD cards. This will be extremely helpful on laptops where the boot drive runs Windows and Linux enthusiasts need to keep it that way. Booting to the SD card will also allow Linux newbies to try a Linux-based operating system without screwing up their Windows install when partitioning.

"Thunar file manager finally supports tabs and other cool features like inverting the selection, improves on location handling and the shortcuts side pane. On the panel we have now a popup calendar and support for timezones. The settings area has improved display settings with the ability to clone displays via the GUI and other basic monitor management options. Last but not least, the window manager has smart placement optimizations for determining the best area to place a new window where it’s least covered on the screen. It also now supports alinging windows next to each other rather than using random gaps", says The Manjaro Team on XFCE.

Regarding KDE, the team says, "with this new release of Plasma 5 providing a visually updated core desktop experience that is easy to use and familiar to the user. Changes under the hood of KDE include the migration to a new, fully hardware-accelerated graphics stack centered around an OpenGL(ES) scenegraph. Plasma is built using Qt 5 and Frameworks 5. Plasma 5.3 introduces a new major version of KDE’s workspace offering. The Manjaro Art Team has forked the new KDE Breeze set and named it Maia to follow in line with the rest of our visually appealing desktops, this artwork concept introduces cleaner visuals and improved readability".

Sadly, the Linux Kernel is not bleeding edge, and is at 3.18. With that said, end-users won't notice a difference, and this slightly older kernel is likely rock solid -- stability is more important than bragging rights, folks. Kernel 4.x should be delivered soon enough.

Ready to download it? You can do so here. While both XFCE and KDE are good, I would suggest the latter when choosing an ISO.