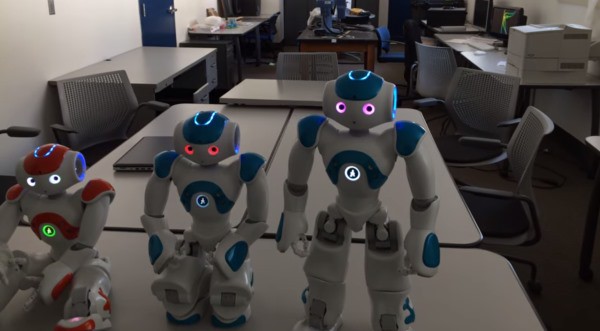 Smartphones might be getting smarter, and the Internet of Things becoming increasingly important, but a large part of the technological future is owned by robots. Human-replacing robots have existed in factories and manufacturing processes for years, but the dream has long been to create a humanoid robot that is 'intelligent' enough to act like a human.

Three robots have been put to the test at the Rensselaer Polytechnic Institute in New York, and scientists showed that one was able to demonstrate self-awareness. We're not quite at the stage of a robot uprising, but it is an important step on the road to improving reasoning and problem-solving in future robots.

The experiment took three Nao robots, and programmed two of them to believe they'd been given a pill that prevented them from speaking. Importantly, none was aware which had been given the 'pill' and which had not. Researchers then asked the robots which pair had taken the pill, and they each tried to respond with "I don't know". Those who were unable to talk remained silent, but the third repeated the phrase. And this is when the magic happened.

Upon hearing its own voice, the robot was quickly able to determine that it had not been silenced by a pill and uttered the words:

Sorry, I know now. I was able to prove that I was not given a dumbing pill.

So not only was the robot able to respond to human input, it also showed that it could recognize itself, and react accordingly.

The full results of the research are due to be presented at the at RO-MAN robotic conference in Japan from August 31 to September 4. Check out the robots in action in the video below:

17 Responses to Robots are becoming self-aware