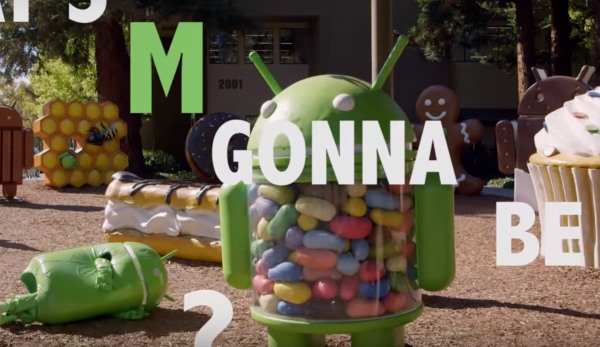 You might still be waiting for Lollipop to limp onto your handset, but just around the corner is Android M. We already know quite a bit about what to expect from the next version of Android -- you can even try out the Android M Developer Preview if you want -- but there's one thing that's far from clear: what is it going to be called.

There have been all sort of guesses since the codename was revealed by Google and now the company (Google, Alphabet... call it what you will...) is starting to tease us with name suggestions. There's also a video that offers a 'musical hint' at the name.

The video, freshly posted to YouTube, is entitled What’s M Gonna Be? and features the hashtag #NatAndLo. We're treated to a history of Android, skipping through the various versions as Google kicks the hype machine into action. Then the suggestions are thrown at the screen: M&M, Mud Pie, Marshmallow... place your bets.

The official Android Twitter feed kicked things off, inviting fans to guess what the name is going to be:

But it is the video that could well contain the information needed to discover the name ahead of time... you might just need to spend a little time decoding what you see and hear:

With Android M drawing ever-closer on the horizon, there's really not long to wait until we find out for sure, but do you have any ideas about what the M could stand for?