How many people are using Windows 10? Watch real time stats!

There have been various numbers thrown around suggesting how many people have downloaded Windows 10 and how many have the operating system installed. Great debates have started about just how accurate these figures may be, but as any statistician will tell you, the more data you have to work with, the more likely it is to give an accurate picture.

Microsoft announced that there were 14 million downloads in the first 24 hours after launch, and it has been estimated that this figure now stands at anything from 50 million to 67 million. UK-based data analysis firm GoSquared has put together a tool that shows, in real time, Windows 10 adoption around the world by indicating its share of Windows traffic.

It's very hard to pin down an exact number of installations at this stage, but GoSquared's figures make for very interesting reading. The company explains that its analysis draws on tens of thousands of sources, aggregating the data to give as accurate a picture as possible. So where does Windows 10 stand at the moment? As I write this Windows 10 accounts for 12 percent of traffic from Windows machines.

As the stats are updated in real time, there is visible fluctuation, and I have watched the number jump from 10 percent to 13 percent and then drop down again. 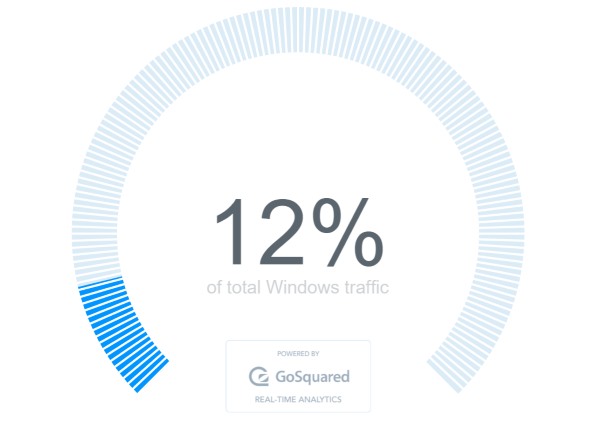 While it's certainly interesting to see what's happening right now, GoSquared's data is more useful for seeing the general trend of Windows 10 adoption -- and that trend is on a definite, steady climb. Since launch, Windows 10 hit a peak in terms of traffic share on 8 August when it hit almost 15 percent.

The company admits that the data may not give a completely accurate picture, saying: "In the scheme of things, it's by no means definitive, but we feel the data shows interesting trends".

Take a look for yourself and see what you think.

47 Responses to How many people are using Windows 10? Watch real time stats!