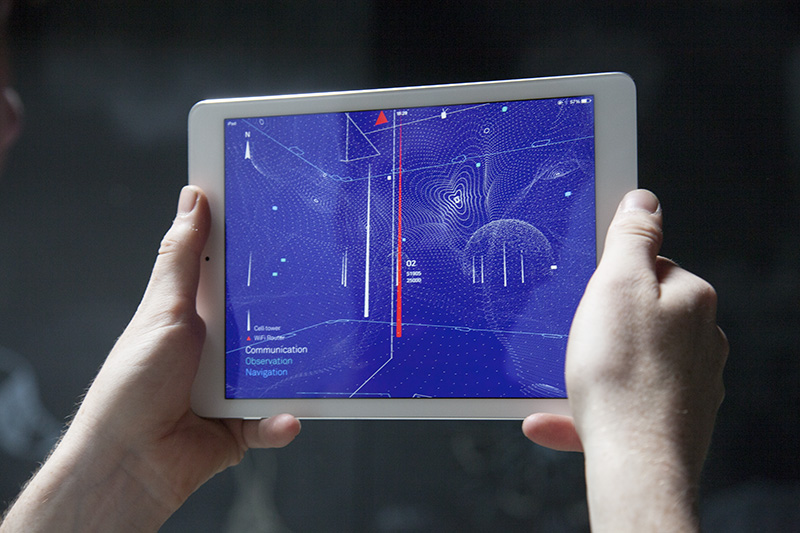 People worry about everything these days, and new technology is often a big cause for concern. Wireless charging, which is starting to appear in appliances, cars, and furniture, has some people fretting that it will microwave their internal organs while they sleep, and it wasn’t that long ago that people were stressing over the possible side effects of Wi-Fi too.

A BBC investigation a few years back found that RF radiation levels in some Wi-Fi-enabled schools were up to three times higher than the levels emitted by a typical mobile phone mast, leading to suggestions that Wi-Fi should be banned in places of education in the UK until its possible dangers had been fully investigated. Of course Wi-Fi hasn’t been banned in schools, or anywhere else for that matter, and it’s become far more ubiquitous. A new iPad app by Dutch designer Richard Vijgen uses augmented reality to visualize the network of radio waves that surround us, and it provides a truly fascinating glimpse into the invisible world that we now rely so much on.

Before you rush off to download the app I should say it’s not actually available to try for yourself. The Architecture of Radio ("a field guide to the hidden world of digital networks") will be on display at Germany’s ZKM | Center for Art and Media from September 2015 - April 2016, but if you can’t make it over there, there’s a video of the app in action available to watch below.

According to the Architecture of Radio website, the app offers a "realtime, location based visualization of cell towers, Wi-Fi routers, communication, navigation and observation satellites and their signals. A site specific version of the app includes wired communication infrastructure embedded in the exhibition space. Its aim is to provide a comprehensive window into the infosphere".