IDC guesstimate: Windows tablets will have most market share gains through 2019

The tablet market is expected to witness yet another decline in shipments, with IDC estimating an eight percent drop in 2015 compared to last year. However, by the end of 2019, the market is said to recover, thanks in most part to a boost from Windows tablets which will help increase shipments by nearly 13 percent over this year's estimate.

Windows tablets do not currently contribute by a significant amount to overall shipments, as they are estimated to have a market share of just 8.4 percent in 2015 from 17.7 million units. That being said, they are the only slates that will display dramatic growth, expected at 59.5 percent by the end of the year compared to 2014. By the end of 2019, their market share is expected to reach 17.5 percent, thanks to shipments of 41.7 million units.

To reach that figure by the end of 2019, Windows tablets will take away share from market leader Android. Android vendors should be worried, as shipments are actually expected to decrease by the end of 2019, from 139.8 million units in 2015 to 135.4 million units, leading to a drop in market share from 66 percent to 56.6 percent. And this space is likely to only get more crowded over time.

Meanwhile, Apple is estimated to ship a slightly increasing number of iPads by the end of 2019, from 54 million in 2015 to 61.9 million, which will see its market share grow slightly, from 25.5 percent to 25.9 percent.

IDC suggests that the tablet market will recover mostly thanks to hybrid devices -- 2-in-1s, as they are referred to. This form factor is mostly associated with Windows, with devices such as Microsoft's Surface Pro 3 proving to be appealing options as laptop replacements. This segment, IDC says, "is starting to gain traction", as it is estimated to grow by 86.5 percent in 2015, compared to last year, thanks to shipments of 14.7 million units.

"In the past, the biggest challenges with 2-in-1 devices were high price points, less than appealing designs, and, quite frankly, lack of demand for Windows 8, which was the OS most devices were running", says IDC's Ryan Reith. "With more OEMs offering devices in this segment, prices have started to come down significantly. We estimate that over 40 different vendors shipped 2-in-1 products in the second quarter of 2015, which is up from just 14 vendors two years ago. With the launch of Windows 10, the introduction of more Android-based products, and the possibility that Apple will unveil a larger, screen-detachable iPad, this is the space to watch".

The things to keep a close eye on are Windows 10 and a larger iPad, both of which are, to quote Reith, "quite frankly" unknowns at this point. It is impossible to determine what sort of effect they -- and their possible successors -- will have over the course of more than four years in a market that, by the most-accurate estimate, is declining.

Yes, consumers seem to be taking to Windows 10, which is running on 75 million devices according to Microsoft but, let's be real, one of the main reasons for this is the free upgrade offer, which is good for valid Windows 7 and Windows 8.1 licenses.

It will only last for a year, or so Microsoft has said, and it should not serve as indication for Windows 10's role in boosting tablet sales. (I am not trying to suggest that Windows tablets will fail to grow at the pace IDC expects, but, realistically speaking, a forecast is just that.) People may like Windows 10 when it's free, but that does not automatically mean that they are willing to buy new devices running Windows 10 -- and this includes tablets -- anytime soon.

On the other matter, Apple has been rumored to be working on a bigger iPad for over two years. There is no clear indication that one will be released this year, but, if it happens, its effect on shipments is hard to determine, as iPad shipments basically suck, and the market as a whole is seeing a drop in shipments also. Yes, "this is the space to watch", but that is not saying much, is it?

To be perfectly honest, this IDC forecast, just like other forecasts, should be taken with a ton of salt. Not a grain. I'm treating it as nothing more than a guesstimate, as there is no way of knowing how a space as young as the tablet market might evolve over the course of four years.

There is plenty of time for major disruptions to happen, which could tip the balance in any player's favor. Windows 10 tablets could turn out to be such huge hits that they could overtake iPads, and a bigger iPad could be so well received that iPads might eat away lots of market share from Android. Truth be told, no one really knows how it might all pan out, and IDC certainly does not have a crystal ball. 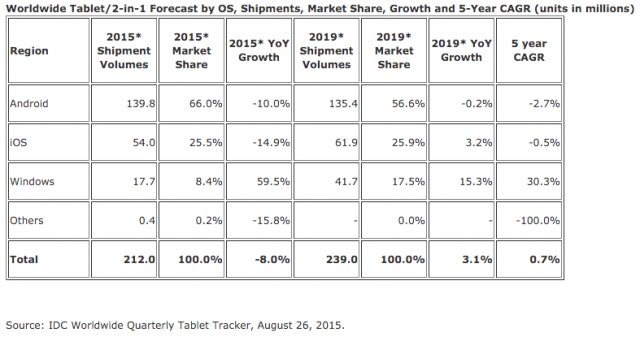 8 Responses to IDC guesstimate: Windows tablets will have most market share gains through 2019