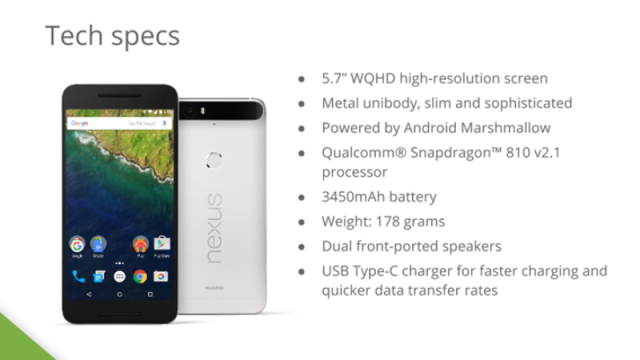 Hardware specs for the upcoming Nexus phone have been leaked, and it seems Apple will have a tough battle on its hands this time.

Android Police has released what seem to be a couple of slides made for retail employees, with hardware specifications and images of the new phone.

The Huawei-made Nexus 6P, the larger of the two new devices, is expected to be unveiled on September 29 (today).

Nexus 6P also beats Apple in terms of battery, although that’s still a long shot. The Nexus 6P will come with a 3,450mAh battery, while the 6S Plus has a 2,915mAh one. However, Apple’s devices are known for good optimization and low energy consumption, so it’s still too early to say if the Nexus 6P will outperform the iPhone 6s Plus.

The Nexus 6P will have a fingerprint sensor located at the back, and will come in a metal unibody which could give the device a premium feel.

It will also be somewhat lighter -- weighing just 178 grams, it will be lighter than the iPhone 6s Plus, which weighs 192 grams. Still, we’re talking 14 grams here, and I’m pretty sure no one would notice the difference.

The Nexus 6P comes in four colours: aluminum (grey), graphite (black), frost (white), and gold which will only be available in Japan "for now".