How does Google's Pixel C compare to Microsoft's Surface Pro 3? 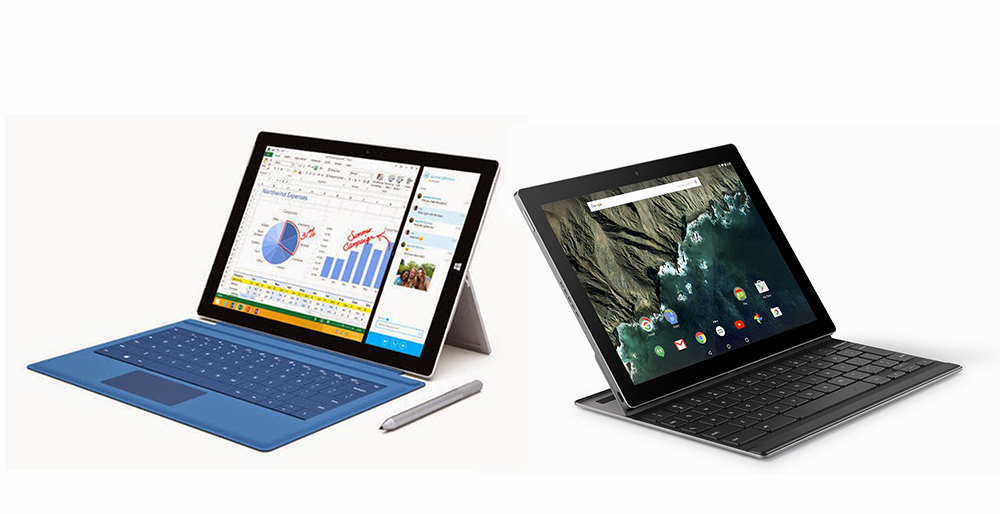 If you want a tablet that can double up as a laptop replacement, there really is no better option than Microsoft's venerable Surface Pro 3. It has been the undisputed king in this segment for well over a year now, and it is easy to see why: it has a big, high-resolution screen, it comes with a stylus, it can take a decent keyboard, its battery life is good, it is extremely fast, and, on top of all this, it can run every Windows program that you want. Nothing comes close, really.

But now that Google has announced Pixel C, its own productivity-oriented tablet, you may be wondering how it fares up against Surface Pro 3. So, let's take a look at the two and see which one is best.

These differences stem from Google's and Microsoft's choice of operating systems. Pixel C runs Android 6.0 Marshmallow, so it is basically limited to the selection of mobile apps available on Google Play. Disregard the spec differences for a minute, and it looks very similar to other high-end Android tablets.

Meanwhile, Surface Pro 3 can be seen as a Windows 10 ambassador now. It can handle heavy programs like Adobe Photoshop, Microsoft Office and VMware Workstation, but also mobile apps available from Store. The Store selection is severely limited compared to Google Play though, which is another difference to keep in mind.

Surface Pro 3's productivity credentials are given a boost by Surface Pen, a stylus which is included with the slate. It is a neat party trick, as it makes it easy to draw and select things. Pixel C does not offer something equivalent, so keep this in mind as well.

Let's Talk About Those Specs

Compared to a typical Android tablet, Pixel C is better suited for things like web browsing, creating and editing documents and spreadsheets, but less so for multimedia -- YouTube videos will have black bands at the top and bottom because of the more squared aspect ratio.

In comparison, Surface Pro 3 has a 12-inch display with a resolution of 2,160 by 1,440, which gives it a slightly higher aspect ratio of 3:2 -- 1.5, compared to Pixel C's 1:42. However, the bigger screen is what matters here, as Surface Pro 3 can be used more comfortably as a laptop replacement more of the time.

Pixel C is equipped with an Nvidia Tegra X1 processor and 3 GB of RAM, which will ensure that it can handle even the most-demanding of apps available on Google Play. Surface Pro 3, however, dwarfs it in this regard thanks to its selection of powerful Intel Core processors and RAM configurations, which span from a 1.5 GHz dual-core Core i3 with 4 GB of RAM to a 1.7 GHz Core i7 with 8 GB of RAM; the x86 processors allow it to run full-fledged Windows programs.

Surface Pro 3 also comes out on top when we are looking at storage. Whereas Pixel C will come in only in 32 GB and 64 GB models, Surface Pro 3, which starts with 64 GB of storage base, can go all the way up to 512 GB of internal storage. And it can take SD cards too, which can expand the storage capacity even further.

If we look at keyboards, Surface Pro 3 is again the winner. The Bluetooth-enabled keyboard that Google has designed for Pixel C looks very cramped -- it has to be, given the small size of Pixel C -- and costs quite a bit -- $149. A Type Cover keyboard for Surface Pro 3, on top of being bigger, has a touchpad and is cheaper -- it normally costs $129.99.

Another area where Surface Pro 3 takes the cake is expansion. Microsoft sells a docking station for it, which adds a whole bunch of ports that make the tablet easy to use with various peripherals and external monitors. There is nothing similar from Google for Pixel C, at least not yet.

At this point it makes little sense to discuss things like battery life, as Pixel C is not even out yet. But, for a device in this segment, I would be surprised if it does not match Surface Pro 3 and iPad Pro.

So, Which One Should You Get

Pixel C is less expensive, but you are also getting a less versatile device. Meanwhile, Surface Pro may be pricier, but it looks like it still is the best "tablet-that-can-replace-your-laptop" that you can get.

Ultimately, however, which tablet you should get depends solely on your usage. If you are the sort of person who needs to run Windows programs, Surface Pro 3 is the obvious choice. But, if you want great mobile apps and your productivity needs only involve things like editing Word documents, Pixel C looks to be the more appropriate choice.

At the end of the day, however, it is tough to see Pixel C as more than a glorified high-end Android tablet. Meanwhile, Surface Pro 3 continues to be the productivity tablet to beat, despite its age. With Surface Pro 4 on the horizon, it will be even harder to compete against Microsoft.

26 Responses to How does Google's Pixel C compare to Microsoft's Surface Pro 3?