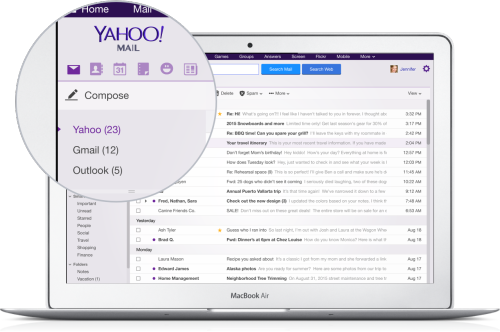 If an email app doesn't support multiple providers, chances are lots of potential users will not bother with it. Or they will seek alternative offerings that do. So, unsurprisingly, major players like Microsoft and Google now welcome those who have embraced rival services to Outlook and Gmail, respectively, even though they would much rather prefer they switch to their own products.

Yahoo has followed suit, adding AOL Mail, Hotmail and Outlook.com to the list of email providers supported in its Yahoo Mail app for Android and iOS. But, as you can probably tell, there was one major service missing from the list -- Gmail. Now, there is an update that rectifies this.

Yahoo says that Gmail (and Google Apps) users who add their accounts to Yahoo Mail will be able to take advantage of all the big features available in the app, like "powerful search, smart contacts, rich compose features and Yahoo Account Key for password-free sign-in".

That means, for instance, that they can search through all their emails, search for contacts, and have all the changes they make immediately sync with Google's servers. There is also support for Gmail in Yahoo Mail's desktop interface, making it easy to access the accounts from PCs.

Those who want to test the new update can grab Yahoo Mail from App Store (iOS) and Google Play (Android).

On top of supporting Gmail accounts, the iOS app now also works in Split View and supports Slide Over on iPads. On Android, the app brings back select all, adds the ability to switch between mailboxes with a single tap, makes the inbox "more readable", settings easier to navigate, touch targets bigger for the sidebar and back buttons, improves accessibility and lowers data consumption.