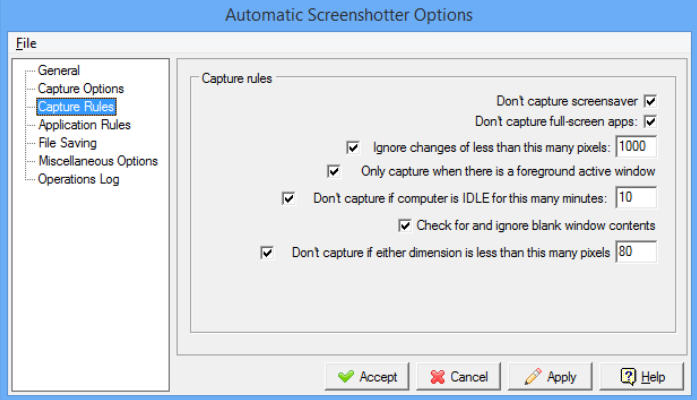 Taking regular screenshots of the desktop sounds like a smart way to record what’s happening on your PC. Until you try it, and are left sorting through folders packed with pointless, near-identical images.

Automatic Screenshotter is different. It doesn’t just blindly capture images at fixed intervals, but also uses a host of rules and options to ensure it only captures the most relevant screens for you.

What it does save is easier to analyze, too, thanks to a convenient naming structure based on the active application and time taken ("notepad_072042" rather than a vague "screen172").

Getting started is easy. Launch the program, right-click its icon in your system tray, choose a capture frequency and leave it to work.

After Automatic Screenshotter has saved the first image, it starts to get a little more discriminating.

It won’t save anything if the screen has hardly changed since last time (you can customize its sensitivity).

It won’t capture an image if the PC is idle for a while, either. And it won’t capture the screensaver. Although if you can think of a reason why it should, you can disable this option or any of the others.

You can also set up custom application rules with blacklists (programs that should never be captured) or whitelists (Automatic Screenshotter should capture these and nothing else).

One common issue with this type of program is disk space, but Automatic Screenshotter has that covered, too. A group of backup-like retention rules enable you to set a maximum number of screenshots, or total amount of disk usage, and the program will delete older screenshots to fit your limits.

Not every default setting makes sense to us. The program won’t initially capture full-screen apps, for instance -- if that’s not what you want, go to Options > Capture Rules and clear the relevant box.

But for the most part, Automatic Screenshotter is just a triumph of extreme tweakability. You can define capture frequencies, targets (desktop/ active monitor), destination file format and naming pattern, custom hotkeys, startup behavior, minimize rules and a whole lot more. Give it a try.

Automatic Screenshotter is a free-for-personal-use tool for Windows 2000 and later.