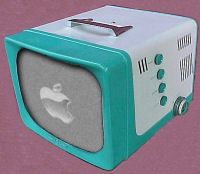 At least twice over the past decade Apple has been close to announcing its own television. Not the Apple TV set top box but actual big screen TVs with, well, big screens. But both times I’ve heard about this Apple backed away at the last minute. And the reason why they did was because even an Apple television would be just another television with an Apple logo. Steve Jobs realized that TVs had become a commodity and there didn’t seem to be an obvious way to make Apple’s television special.

I’m not here to say Apple has finally found its TV design path as suggested in Walter Isaacson’s book and will be doing a big screen TV after all. In fact I’m pretty sure Apple will never sell its own TVs. But I think Cupertino has finally figured out a way to grab an important and profitable part of nearly all TVs, controlling the future of video entertainment in the process.

Cupertino has found success over the years by proposing new technical standards and also by taking the lead in product categories that were already considered mature. WiFi 802.11 started as an Apple initiative as did Firewire 1394. Apple’s iPod was not the first MP3 player, yet redefined the category much as the iPhone redefined smart phones and the iPad redefined tablet computers. If Apple is to redefine television in a similar manner then Cupertino will have to do more than slap a more user-friendly interface on your next TV. They’ll have to combine that interface with some really compelling new technology that isn’t available anywhere else.

The technical area I think Apple wants to dominate is High Dynamic Range (HDR) video -- technology for making displays of all types brighter and display more colors. Right now there are two major video advances entering the market -- 4K and HDR -- and tests show HDR is a much more obvious improvement than 4K for viewers.

Apple has long taken pride in their screens, whether they are Retina displays on phones, tablets or notebooks or 5K iMac displays. As the dominant hardware vendor for video editors Apple has to stay on the leading edge of display technology. And what is a TV but a bigger display?

When color TV was developed in the 1950s there were in the USA two technical standards, one from RCA and another from CBS and manufactured by Zenith. CBS’s color was better but RCA’s had the advantage that it could also support legacy monochrome content (the CBS scan rate was reduced to 20 frames with each frame having 343, rather than 525, lines). Ultimately, as these things go, both standards were merged into the NTSC color televisions we first saw in the 1960s. But "color" in those early TVs was a subjective thing because there were very real limitations to the color phosphors used in 1960s Cathode Ray Tube (CRT) displays. The so-called color model used in those TVs wasn’t defined by what people could see but by what those early phosphors were capable of showing. You can’t even buy a CRT television today yet that original color model remains in effect. Or it did until HDR.

There was no black in that original color TV video model, for example. Think about it: a CRT that defined color as something produced by electrons exciting a phosphor layer was entirely additive, but adding colors in a red-green-blue model adds up to white, not black. So black was the absence of electrons, something CRTs did in a half-assed way at best. Even LCD displays are dependent on a backlight for their brightness, so they don’t do such a good job with black, either. What’s needed to show a true black is a screen technology in which the pixels, not the backlight behind them, produce their own light. Organic Light Emitting Diode (OLED) technology does that.

So the key to HDR is an OLED display. And OLED displays can not only show images that are both brighter and dimmer than other display types, they can show colors that are beyond both the traditional TV color space and even the feature film color space that was defined by the colors capable of being chemically rendered by KODAK and Fuji film.

Now we put on our TV salesman hats. The goal of every television salesperson is to sell you and me a new TV. The way they do this is by disparaging the TV we already own even if it was the one that same salesman sold us last season. Well now it’s crap. You need a new TV.

To drive that need -- to get us to see how obviously we need an OLED TV, for example -- there has to be content that takes obvious advantage of this new standard. And so RCA subsidized the production of Bonanza to get people to buy color TVs. People won’t be buying OLED TVs in large numbers until HDR is broadly adopted in TV production. But once it is adopted, we’ll all need new TVs that the TV salesmen will gleefully sell to us -- 4K HDR OLED TVs.

Apple could be preparing its own 4K HDR OLED TV for sale but I don’t think so. A better move for Apple would be to take command of the whole HDR video wave by acquiring a dominant position in HDR intellectual property. That way every new TV from any manufacturer would have to license IP from Apple in order to be attractive to buyers.

This would give Apple both a revenue stream from HDR royalties and a weapon (the possible denial of HDR licenses) to compel certain behaviors from other companies.

The IP licensing business has extremely high profit margins. So even though this would be Apple deriving revenue from the lower-margin TV hardware sector, for Apple the margins would be a software-like 80-90 percent. That’s a much better way for Apple to be in the TV hardware business than actually selling TVs.

By controlling HDR Apple could come to control the entire video ecosystem. And the best way for Apple to control HDR would be by acquiring Dolby Labs.

Here’s the current state of HDR in the video production market. FilmLight, Adobe and DaVinci have software with HDR color space built in. There are other vendors that have plug-ins that advertise HDR but it’s not actually the true SMPTE 2084 (PQ Color Space or True HDR). You cannot get a true HDR color grade without a true HDR Reference standard monitor and those displays won’t work with HDR-ish plugins.

PQ space is a perceptual space based on the human visual system. It is a logarithmic-like curve that replaces gamma in image encoding. The human eye has always been capable of visual fidelity far beyond our current video and image standards. Dolby has been trying to figure out how to deliver this for seven years.

Dolby Vision (Dolby’s HDR product) isn’t a video grading system but an end-to-end video distribution solution. Dolby’s challenge has been to come up with a true HDR master and deliver it as HDR while at the same time delivering a base layer that would play on a standard TV as well. This is precisely analogous to RCA’s ability in the 1950s to preserve B&W signal transmission as part of its color TV solution. Dolby Vision supports both HDR and SDR (standard dynamic range).

Our current standards are TVs at 100 nits of brightness. HDR can theoretically go up to 10,000 nits. Right now Dolby has reference broadcast monitors that are 2000 and 4000 nits. Consumer HDR televisions will likely range from 700-1500 nits. This is where it gets complicated since a 700 nit display and a 4000 nit display and everything in between are all considered HDR.

Dolby Vision combines metadata and multiple layers of information in order to deliver high dynamic range images that work across all the TVs and systems out there. They are using very sophisticated predictive technology to scale image fidelity on the fly. A Dolby Vision licensed TV set will be identified, and the Dolby Vision video stream will use metadata created at the source and embedded in the program to deliver and scale the appropriate brightness to each set respectively. Dolby Vision technology will just deliver the SDR base layer to a standard TV set.

Dolby isn’t the only player in this field. SONY is working on a similar system, but SONY is too big and troubled for Apple to buy.

Steve Jobs liked to bring technologies to the market in a way that enhanced the user experience without being intrusive. As such, Apple’s strength is also their dilemma since Steve’s vision ultimately ends up in technology being invisible.

Dolby is already invisible. To most consumers Dolby is just a logo. A purchase like Dolby would cement Apple’s presence both in consumer electronics and the professional space all in one move. They could own a piece of every theater both at home and at the cinema, worldwide.

Apple would be a de facto standard in both audio and video on devices and in content creation and distribution, even for performance venues. What added value would having Dolby bring to Beats, for example? Plenty.

At around $6 billion Dolby would be cheap for Apple to buy. The quality of Dolby engineering is such that Apple would be thrilled to have the people, too, not just their technology. And as a part of Apple the resources Dolby engineers could command would grow exponentially.

Since the entertainment complex is already so heavily invested in Dolby standards that would give Apple added muscle in contract negotiations with video distributors. Apple could use the denial of an HDR license to compel certain behaviors in friends and enemies. Apple, you see, is one of many companies trying to move cable television onto the Internet. But like the other companies trying to build such Internet virtual cable systems, Apple has had a hard time acquiring content rights. Major broadcast networks don’t want Apple to undermine their over-the-air or over-the-cable-system revenue streams. Cable networks and movie studios are wary, too. And so Apple struggles. Intel tried to do the same thing and gave up entirely, selling its project to Verizon.

But if Apple can find a way to become the HDR gatekeeper, they can effectively deny big broadcast networks access to HDR. They could deny access to cable systems, cable channels, movie studios -- anyone with content to license.

Dolby could be for Apple the one ring to rule them all.