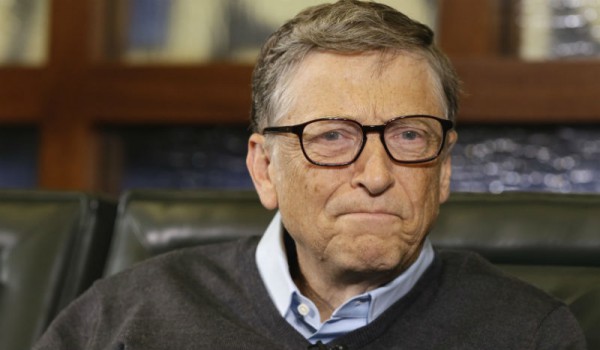 I see something disingenuous about Microsoft cofounder Bill Gates supporting the government's demands that Apple selectively unlock an iPhone used by one of the San Bernardino, Calif. shooters. The former CEO turned philanthropist spoke to the Financial times in an interview posted today. The implications for Microsoft cannot be overstated, and the company's current chief executive should state corporate policy.

Gates' position aligns with the government's: That this case is specific, and isolated, and that the demand would merely provide "access to information". Here's the thing: The interviewer asks Gates if he supports tech companies providing backdoors to their smartphones. The technologist deflects: "Nobody's talking about a backdoor". Media consultants teach publicly-facing officials to offer non-answers exactly like this one. The answer defines the narrative, not the interviewer's question.

Except this: Gates suffers interviewee foot-in-mouth disease in the worst way, as his response, or lack of it, puts him on the government's side. He later tries to backpedal in an interview with Bloomberg, stating he is "disappointed" with the FT report and "that doesn’t state my view on this". Thing is: Financial Times posts a video of the interview that clearly gives context. The philanthropist's selective, deflective answer to the backdoor question is unambiguous.

In  followup question during the FT interview, Gates states—and I'd argue without the technical trade secret expertise about iOS and iCloud encryption—that "Apple has access to the information. They're just refusing to provide the access". He likens the government demands to a bank :tying a ribbon around a disk drive. "Don't make me cut this ribbon, `cause you'll make me cut it many times".

But that response diminishes the encryption technology, which is a helluva lot more like a fortress than a "ribbon" tied around a disk drive.

Quick recap: Law enforcement classifies the Dec. 2, 2015 San Bernardino shooting as an act of terrorism. The  county health department owned the iPhone 5c and granted access to it. But a four-digit numerical passcode was needed, and in the hours following the attack an official reset the associated iCloud account, eliminating that as means of getting to the "information".

The Feds want Apple to create custom software, which I've seen on the InterWebs sarcastically called FBIOS, to turn off the security measure that wipes data after 10 failed password attempts and to enable a means for automating a "brute force" attack to uncover the correct combination. Apple contends that complying would undermine security, create a backdoor for accessing any iPhone, and would undermine customer trust. The DOJ disagrees.

In a legal filing, the agency asserts that the so-called FBIOS wouldn't need to come into "government custody...Just as with Apple's already-existing operating systems and software, no one outside Apple would have access to the software required by the order unless Apple itself chose to share it".

Possession doesn't change this: Encryption must be bypassed.

"Complying with this particular FBI request would set a damaging precedent", Stephen Cobb, senior security researcher for ESET, says. "If Apple were to comply with this court order, the ramifications for U.S. companies and consumers would be significant, from undermining international commerce to eroding trust in the technology on which so much of daily life and business in North America depends".

In news reporting, my first question always is this: Who benefits? When Gates was Microsoft CEO, I listened to him testify in open court claiming that the company could not remove Internet Explorer from Windows; that such action would break the operating system. The company took a firm position during antitrust cases on two continents that the government shouldn't dictate how software is developed. That is the core issue here with respect to Apple unlocking the iPhone 5c.

But now Gates is a philanthropist, who travels the globe, and many of his operations require government cooperation. Taking a position against the FBI and U.S. Justice Department could undermine his efforts here and abroad. Perception matters as much in philanthropy as business.

I wonder if his answers would be dramatically different and more aligned with past positions if answering for Microsoft. As a journalist covering the tech sector for more than 20 years, and Microsoft for much of that time, I see this: Gates' response to the first interview is appallingly contradictory and his backpedaling in the second bewilderingly undermines his authority as successful entrepreneur and philanthropist.

But matters are worse. During the Windows NT 4 release cycle two decades ago, rumors started circulating that Microsoft had created a backdoor for the NSA. The accusations resurfaced for Windows 2000 and XP. By failing to directly answer FT interviewer Stephen Foley's direct question about allowing government backdoors and by taking a neutral to pro-FBI position with respect to Apple's refusal, Gates appears to support selective government access by way of a backdoor. What he thinks is immaterial to the perception he creates as former Microsoft CEO during the time period in question about the alleged NSA backdoor.

From a Microsoft public relations perspective, Gates' answers in booth interviews are a catastrophic occurrence that demands current chief executive Satya Nadella's official response. There needs to be clear policy about government backdoors and the position with respect to the San Bernardino shooting iPhone. If Microsoft corporate policy aligns with Gates' statements, say so. If not, state the position for the benefit of the large IT organizations that are the company's core customer base.

If not, rumors run wild will set the narrative, causing potential harm to Microsoft's brand.

83 Responses to Bill Gates is wrong