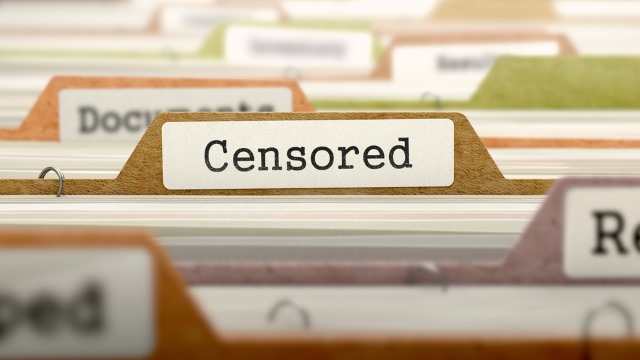 In recent weeks, a celebrity couple took out a superinjunction to prevent the press from publishing details of an alleged affair (well, a threesome if we cut to the chase). The gagging order prevented news outlets in the UK referring to the couple as anything other than the initials PJS and YMA (not their actual initials, by the way) and the other participants in the alleged ménage à trois as AB and CD. But today a Scottish newspaper took the decision to reveal the names of the couple -- but it could only do so in its print edition, because of the way laws written for the printed press have been awkwardly applied to the web.

The case is something of a legal minefield. Just as the press in England is not able to publish the names of those involved, it is also not permitted to provide clues or hints that could enable readers to determine their identity. This means that British newspapers cannot even name the Scottish newspaper that draws back the curtain. In fact, the newspaper in question is not legally able to publish the same information online as it can in its print edition simply because it could be accessed in England.

If this seems like insanity to you, you are far from being alone. If you're reading this in the States -- or even if you are in the UK -- you are probably already aware of the couple at the center of the case. It has been covered by the National Enquirer (yes, I know...) and there has been intense speculation on Twitter in recent weeks. For the risk of being sued, newspapers reporting the fact that the gagging order has been ignored in some parts of the UK must refer to the publication in question indirectly: 'a Scottish newspaper', very much like referring to 'the Scottish play' instead of risking saying 'Macbeth' in a theater.

The Scottish newspaper's website includes an editorial piece which says:

As our digital content is read in England we cannot reproduce the story online, tell you who they are or even feature the front page.

But their names are already known in the United States where the stories have been published and their identities are all over social media.

Of course, it takes just a few seconds of your time to discover the people involved if you are interested. But something interesting is happening. While Twitter has been abuzz with speculation about who the celebrity couple might be, there is also an element of self-censorship taking place. One user posted a photograph of the newspaper article in which the couple was named, but after taking advice from another news outlet, opted to delete the tweet:

@hex_inc If you don't want to risk getting sued, yes.

But as the newspaper says;

We are publishing the identities today because there is no legal reason not to publish in Scotland what has been banned in England and Wales. Their big secret is no secret at all. America knows. The internet knows. The whole world knows. So now Scotland knows. And so we should.

The paper is quick to point out that the decision was taken as a demonstration of support of freedom of the press:

Just to be clear, we are not naming them because of the story they are trying to suppress. We couldn’t care less. We do, however, care about free speech, a free press and very wealthy people spending huge sums of money stopping stories they do not much like the sound of.

If we did not name them, it would only encourage people -- possibly celebrities, more probably tycoons and politicians -- with something to hide to attempt to hide it behind a court order.

It's crazy to think that the couple involved could possibly have thought that the story could be stopped in its tracks using a court order. If anything it has served only to drag things on for longer than might otherwise have been the case. Left to run its natural course, the story probably would have burned out and been forgotten in a matter of days. As it is, it has been dragged out for weeks, and it has been brought to global attention.

It has also highlighted an important difference between how the law applies to land-based newspapers, and how it applies to the global internet. While newspapers in England may have been effectively censored, the same cannot be said of internet users.

And if you're wondering why we're neither naming the celebrities nor linking to the Scottish newspaper we're taking about, there are a couple of reasons. Firstly, this is not a celebrity gossip site, so this is not the place to discuss A-listers' bedroom antics. But secondly, as stupid as it may be, we're playing it safe. Our pockets simply aren't as deep as those of the couple involved. There is the fact that a) BetaNews is based in the US and, b) I'm writing this from Scotland, but is it worth the risk? Really?