Quality control and pet monkeys: My search for a decent laptop continues 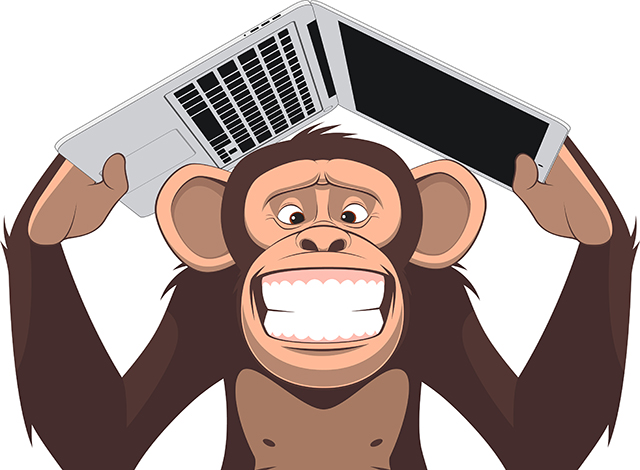 What the hell is going on with quality control these days? It seems like every new PC I buy or test has something wrong with it right out of the box. Whether it’s a strange hardware failure, a bizarro software glitch, or something less easily definable, the new machine will undoubtedly go belly up in some fashion within the first six months.

Take Dell’s Inspiron 13, for example. In my quest to find a replacement for my HP Envy x2 (abandoned by Microsoft/Intel/HP) and, later, my Surface 3 (destroyed in an incident involving a moving vehicle, alcohol, and an undomesticated pet monkey), I took one of the company’s 7000 series 2-in-1s home for a weekend of testing and evaluation.

But no sooner had I completed the initial Windows 10 registration steps than the touch-screen stopped working. No rhyme or reason. It just sort of "died" -- as in Windows 10 no longer recognized that the PC had ever even had a touch screen. After much googling and driver downloading, and a fruitless call with some guy named "Rajeev" at Dell technical support, I threw in the towel and returned the unit to Costco. Scratch Dell off my list of potential OEMs!

Then there was the incident with my son’s HP laptop last year. Not six months after I bought it for him the hard disk failed. Again, no apparent reason for the failure. No sign that he accidentally dropped it or was otherwise abusive to the unit (teenage boys will be teenage boys). It just stopped spinning. And, of course, we were overseas at the time, which meant it was up to me to jury-rig a solution until we could get the unit back to the States for warranty repair.

Pro Tip: If you buy a PC from a major U.S. brand in the States, and it fails while you’re working overseas, you’re screwed. Even if the OEM has a local distributor at your region, they likely won’t honor the warranty. This was the case with my son’s laptop while we were on Mauritius. The local HP shop refused to touch it and I had to swap his hard disk myself with an extra I had left over from an older Lenovo W700DS. Total P.I.T.A.!

Of course, some will point to my choice of gear -- budget HP and Dell PCs -- and say I "got what I paid for". But I’m finding that even "quality" brands and models aren’t immune to QC oversight. Take, for example, the Microsoft Surface Book I picked-up recently at my local Best Buy. I got this machine to evaluate its potential as a replacement for my teenage daughter’s combo of an HP Envy laptop and Wacom digitizer (she’s a budding digital artist who is already getting commissioned through her gallery pages on deviantart.com).

However, as I tried to demo the Surface Book’s reversible screen to her, the funky electro-mechanical-alien-membrane latch mechanism kept getting stuck. Worse, still, if I was persistent and kept pushing the keyboard-mounted release button, the machine would "blue screen". I already have enough trouble with overly-engineered machines (I drive an Audi -- enough said). The last thing I need is to get stuck with yet another buggy or broken device when we fly back home to our island hideaway. So it was back to Best Buy with the Surface Book.

Now, I’m not one to subscribe to conspiracy theories. Nor am I willing to point the finger of blame at any one country or region (China). But my failure to get more than a few months use out of any new PC has me wondering what the hell is going on here.

Maybe it was just bad luck. Or maybe quality control really has fallen victim to the rapid-fire, dog-eat-dog world of commodity PC sales. I would love for a mainstream OEM to prove me wrong. If you’ve got a decent convertible 2-in-1 or Surface Pro work-alike you think would fit my needs (and that will work reliably for more than a few weeks), I’m all ears!

29 Responses to Quality control and pet monkeys: My search for a decent laptop continues