Searching for a nanotech self-organizing principle 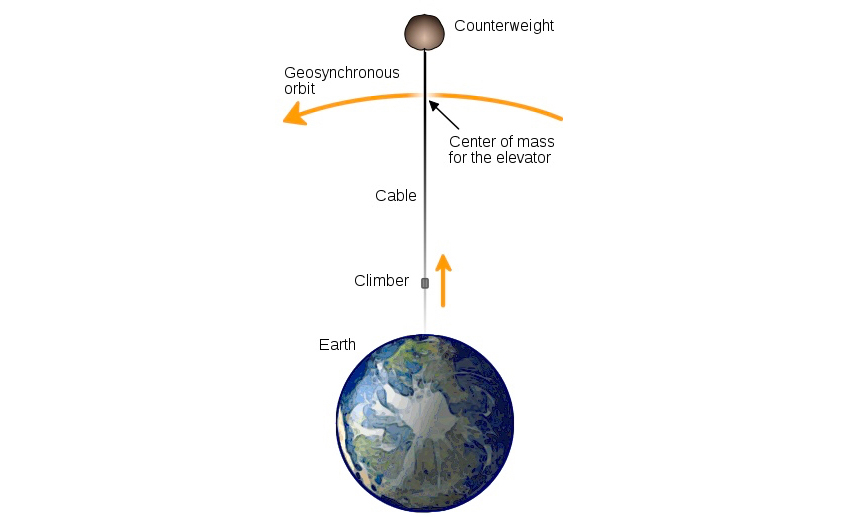 One of the frustrations of nanotechnology is that we generally can’t make nano materials in large quantities or at low cost, much less both. For the last five years a friend of mine has been telling me this story, explaining that there’s a secret manufacturing method and that he’s seen it. I’m beginning to think the guy is right. We may finally be on the threshold of the real nanotech revolution.

Say you want to build a space elevator, which is probably the easiest way to hoist payloads into orbit. Easy yet also impossible, because no material can be manufactured that is strong enough to make an elevator cable to space. The weight of the cable alone would cause too much tensile stress: it couldn’t carry itself, much less a commercially-viable payload, too. Some exotic new material is required, one with a strength-to-weight ratio beyond any present material, even spider silk. So we talk about space elevators, we have conferences about space elevators, we draw picture after picture of space elevators, yet we can’t make one. Or couldn’t… until now.

Nanotech has always seemed to me a bit of a tease. The ideas are profound: we make tiny little machines and use them for whole new purposes. And we can do it to some extent -- building materials in small amounts and Micro-Electrical-Mechanical-Systems (MEMS), putting an accelerometer and a barometer and a compass in your mobile phone. Nano tech is little things that so far we make in small amounts, but it still isn’t a space elevator. That would take a thousand tons of carbon nanotubes -- a billion times more nanotubes than the entire world production to date.

Nanotech, before there was really anything nano to sell or buy, and certainly before there was anything to even show, was promoted as an idea with, as I recall, two main images: 1) microscopic machines injected into your bloodstream to chip away and remove cholesterol deposits like tiny backhoes, and; 2) a swimming pool filled with primordial raw materials and millions more tiny machines would produce an exact replica of a Tucker Tornado car right down to having lacquer paint and a full tank of gas. Drain the pool and drive the car away. Is it possible? Sometime in the mid-22nd century, maybe. I haven’t had a nano-cholesterol treatment yet, have you? And where’s that damned Tucker?

The fact is that nanotechnology is having a huge impact but -- as inevitably happens -- it isn’t working out the way we first expected. It’s not so customer-facing for one thing. And some of the things that had to happen for nano to have the kind of success originally predicted didn’t come about, or haven’t yet. But in one specific area that might be about to change. Still no custom Tucker Tornados, but the grander, bigger, promise of nanotech may be soon realized.

The next step in nanotech is making huge amounts of basic nano building materials. We already know generally what we want to make, we just don’t know how to do it economically and in huge quantities.

The Engineer is a good friend of mine. He’s the real deal, a technologist who makes stuff that works. He can fix your car, build you a satellite, or blow you up.  A renaissance man, he can do it all. And he exists, I swear it. He just prefers to work in the background.

The Engineer told me years ago that nanotechnology would never reach its potential until smart materials could be manufactured in huge volumes needed to make real things in great numbers. Until then it would be all mobile phones and maybe really cool paint pigments, but no piles of nanotubes and certainly no new Tuckers. "What’s needed", he told me back in 2011, "is a self-organizing principle -- a way to get nano materials to essentially make themselves".

It’s an obvious idea if you think about it. Both the cholesterol and Tucker examples require fine-grained design and control where making graphene cloth or billets of super-metal shouldn’t. We might be able to design little machines to make a Tucker but they’d build so slowly that it wouldn’t be practical. At this point we just need to make relatively simple nano-materials and make them quickly in huge quantities.

"It can be done", claimed the Engineer back in 2011. "If you understand the self-organizing principle. We can make these materials quickly and cheaply. the basic building block is carbon and that can be taken directly from the air, possibly saving us from global warning".

The Engineer didn’t claim to have invented this principle or even to have discovered it. That was the work of a Russian scientist now deceased, his most important work unpublished, forgotten. But the Engineer knew about it.

So why not start making these materials? Heck, I saw the Engineer make sheets of graphene in his microwave oven. Why not claim the prize?

"You know I don’t work that way", he said. "Eventually people will start to figure it out. I’ll keep you posted".

And so he did. Over the years as he saw the light start to come on in this lab or another he’d point them out to me, sending me links to dozens of projects. That very first link is here and the two most recent ones are here and here. These last two show that scientists are getting very close to understanding the so-called self-organizing principle. The one from Rice University shows for the first time a technique for getting carbon nanotubes to organize themselves into longer wire from which cables could presumably be made. This could be the key to that space elevator. The Rice folks give their self-organizing function a clever name, too --  Teslaphoresis. What’s funny here is they think they invented this stuff.

The Engineer tells me the buckyball example from Dartmouth of using proteins is just a shortcut, that there are more direct ways to provoke the same effect.  Here’s how he puts it:

The theory is that the self organizing tendency originates from quantum wave functions.  Some argue that the wave function is the fundamental element that defines reality. That within the wave function is all the information needed to describe –  and possibly recreate any physical system. A simplistic view being that we inhabit a universe made of particles organized by wave function.  If we move from the quantum level where we understand that wave functions organize and manipulate systems of subatomic particles to the macro level where we now know we can use of waves – either EM or acoustical to manipulate and organize particles at nano-scale and beyond. As I have said, I feel that all biological entities use self organization during reproduction and repair. Crystals are a perfect example of non-biological self organization. Crystal self organization has been used for many decades now to "grow" electronic and photonic components. "Grow" being another word for self organization.  Simple manipulation based on self organization is pretty simple. Creating a programming language and the machines to directly create and replicate items is years away.

What’s key here and the whole reason for writing this column is the people doing this work aren’t generally thinking big enough. They are experts in one sub-specialty or another and haven’t step back to consider that the basic techniques they are developing could be applicable to making many types of nano materials. They aren’t seeing the big picture. And that’s why, after five years of waiting, I’m finally writing this column.

6 Responses to Searching for a nanotech self-organizing principle