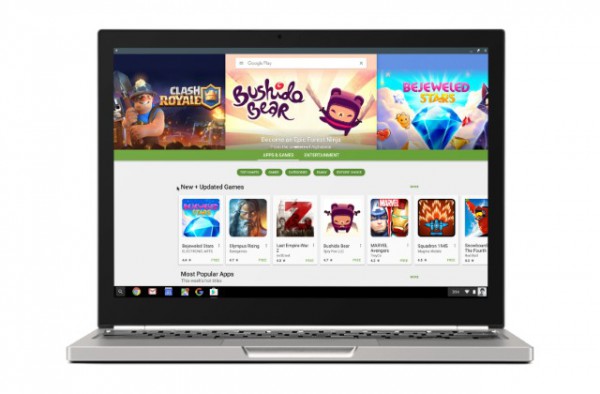 Much like Windows Mobile, Chromebooks have long suffered with something of a limited range of apps. Starting today, all this changes; Google is bringing the full range of Android apps to Chromebook users via the Google Play store.

With Chromebooks having just overtaken Macs in terms of popularity, the introduction of millions of Android apps to the platform is incredibly well-timed. Before you get too excited, the rollout is not immediate. Users on the developer channel with certain Chromebook models will get access first, but there are plans to bring Google Play to more devices over the coming months.

The rollout starts with M53 on the ASUS Chromebook Flip, the Acer Chromebook R 11 and the latest Chromebook Pixel on the developer channel, and Google says it will maintain a list of supported devices online. In a blog post introducing the arrival of Android apps on Chromebooks, the company says:

This means you’ll be able to download and use Android apps, so you can make a Skype call, work with Office files and be productive offline -- or take a break with games like Minecraft, Hearthstone or Clash of Clans. The same apps that run on phones and tablets can now run on Chromebooks without compromising their speed, simplicity or security. This is good for users and great for developers -- in addition to phones and tablets, they will be able to easily bring their apps to laptops. And all this is built on top of Chrome OS, so users will continue to have everything they love in their Chromebooks.

The arrival of Google Play is clearly great news for Chromebook users, and the story is likely to get even better over time. Developers now have a greater reason than ever to produce apps, blurring the boundaries between laptops, smartphones and tablets. Chromebooks just became exciting again.