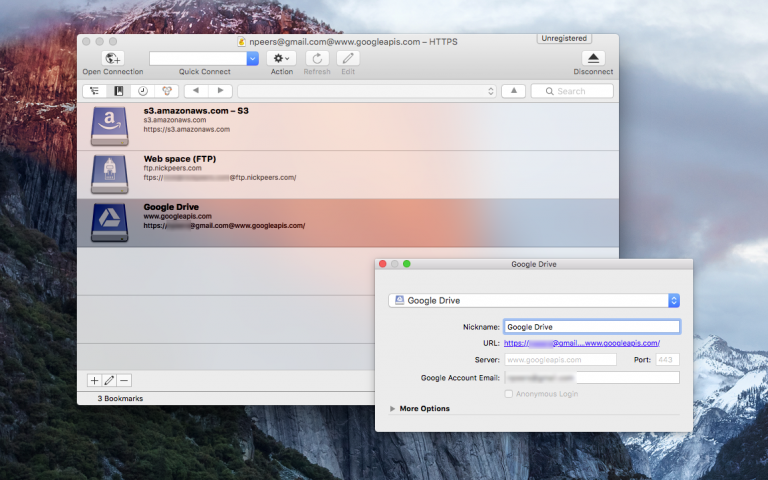 Swiss open-source cloud-storage browser Cyberduck 5.0 has been released for Mac and Windows. The tool provides a friendly front-end for browsing a variety of different cloud servers, including FTP/SFTP, WebDAV, Amazon S3 and Google Cloud Space.

Version 5.0 sees the program get a minor facelift on the Mac platform, plus it adds support for two extra storage providers, including Google Drive, support for which had previously been dropped.

Mac users will notice a significant change to the program’s UI, with the main toolbar shrunk and icons rendered in monochrome rather than color. It fits in better with later versions of OS X and provides a more professional look.

Support for Google Drive has also been added back to CyberDuck -- users will need to obtain an authorization code from Google to gain access, which is handled when attempting to log in for the first time.

Other S3 account changes see the default signature version of authentication switched to AWS4, while users gain an option to use AWS KWS-Managed Keys (SSE-KMS) for server side encryption.

CyberDuck also gains the ability to repeat failed transfers for single segments of multipart large files when using S3, OpenStack Swift or Backblaze B2 storage. Backblaze B2 support was added in version 4.9.

The latest version also includes a number of bug fixes, including one that saw no prompt appear on Windows PCs when attempting to import WinSCP bookmarks.

CyberDuck 5.0 is available now as a free, open-source download for Windows (Vista or later) and Mac (OS X 10.7 64-bit or later). Users are encouraged to donate to the continued development of the software, or can alternatively purchase it for $23.99 through the Mac App Store.