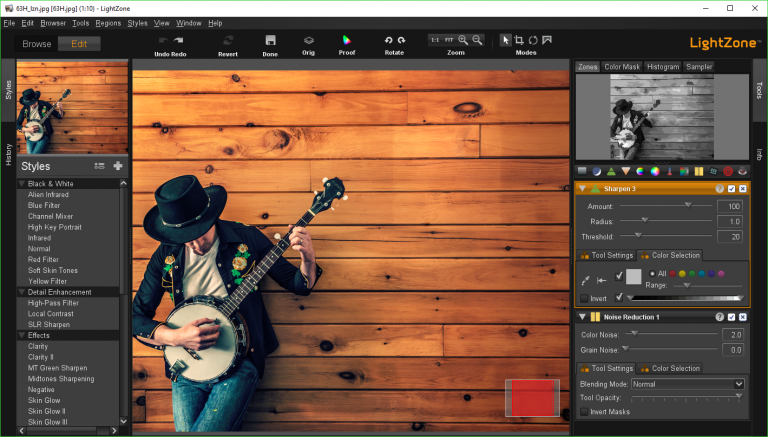 If you’re looking for a free image editor then you’ll probably start with the big names, the latest updates, whatever’s made the headlines recently. But there’s also a whole world of mature software out there which doesn’t make the news, and isn’t updated often, yet could still deliver everything you need.

LightZone started life more than 10 years ago as a commercial RAW and JPEG processor, for example, but since going open source in 2013 the project has very quiet. There is some activity, though -- the last release was at the end of June, more on the way -- and there’s plenty of functionality to explore.

It takes a moment to get the download, as the developer requires you register at the project forum, first. But this is just the usual "user name/ email address" process, and once that’s out of the way, installation is simple and hassle-free.

Most of these give you plenty of scope for fine-tuning. Click "Sharpen", say, and you’re able to set an amount, radius, threshold, blending mode, opacity, make a color selection, and more.

Even the simpler options generally delivered more results than we were expecting. These aren’t just the "turn the picture slightly blue" filters you’ll often get elsewhere: they really can noticeably improve the image.

You can restrict a tool’s effect to specific areas of an image by "drawing" around them. These are much like masks in other tools, but they’ve vector-based, so you can edit them at any time.

Whatever tools you use are organized in a "stack", similar to layers in other applications. This means that if you carry out several operations on an image, you can always step back to any of these, modify or delete it, and view the results right away.

Overall, it’s not going to replace Lightroom any time soon, but LightZone is still a very capable photo processor and editor. If you’ve not tried it before -- or you’d forgotten it existed -- then go take a look, remind yourself what it can do.

LightZone is an open source application for Windows, Linux and Mac.

One Response to LightZone: still a great image editor