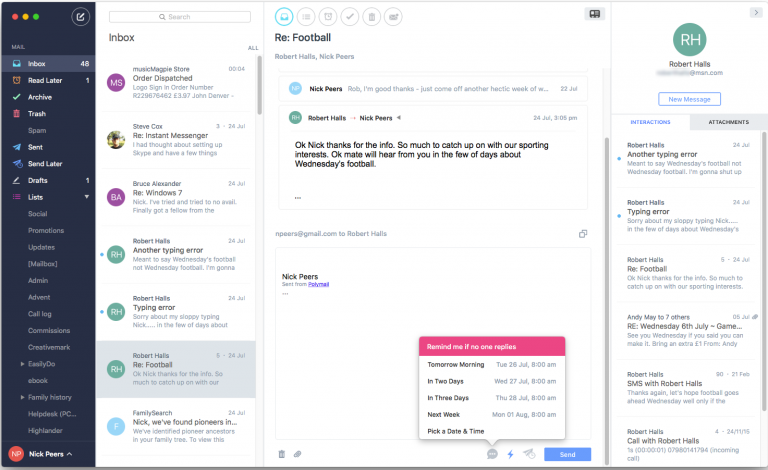 If you’re still looking for the perfect email experience on Mac and iOS, then Polymail, Inc may have something to fill the gap left by Mailbox’s unceremonious exit back in February. It’s just officially released Polymail for Mac 1.01 after around six months in beta.

Polymail provides an Apple-centric experience across mobile and desktop through the use of an associated Polymail account. The account not only ensures a consistent experience across multiple devices, but it also powers some of Polymail’s useful features.

These features -- see below -- help explain Polymail’s quite extensive demands for access to your accounts, including contacts and calendar.

Once signed up, it’s time to add your email accounts. It’s here where Polymail’s major limitation comes to the fore, as right now it only supports a limited number of cloud-based accounts. Google works out of the box, while iCloud and Microsoft (Outlook.com and Office 365) are also supported -- technically. At time of writing both were "temporarily disabled" due to unspecified issues. Not exactly an auspicious start.

Once set up, you’re whisked to your inbox where -- for a brief moment -- you see the 'Inbox Zero' screen, the nirvana for all email users. It won’t take long for this to disappear as your account is synced.

In terms of presentation, Polymail reminds us of the late, lamented Mailbox, albeit with some handy extras. It’s relatively clean, intuitive and easy to navigate, with a consistent look and experience across mobile and desktop. That said, there’s a distinct lack of text-formatting options and no option to set a custom font size for reading emails on the Mac, which makes Polymail hard to read on newer Retina displays.

Another improvement is that Polymail is better integrated with those clients it does support -- if you’re a Google Mail user, for example, then you can enable 'Gmail Categories' to browse your messages by whatever labels you’ve assigned to them.

Select a message and you’ll see a Contacts pane appear on the right-hand screen of the Mac. This reveals useful info about that person, from their social handles (if known) to a record of previous conversations with you as well as any file attachments shared. iOS users can see this info by tapping on the contact’s name within the message body.

Other useful tools include a repeat of Mailbox’s Read Later option, allowing you to 'snooze' certain emails, to be reminded at a later date. You can also queue up messages to send later too.

Polymail also offers a tracked messages feature to allow you to see when someone has opened it, plus you can attach a reminder to follow up a sent email after a specified time too.

It doesn’t end there: you can unsend emails immediately after sending them, plus opt out of newsletters via a prominently placed Unsubscribe button. All of this functionality can be bolted on to other clients (including web apps), but to have it all to hand, out of the box, is welcome.

Additional mail provider support is promised, namely Yahoo, Microsoft Exchange and -- crucially -- IMAP, although given the current issues, they may be some time coming yet. There’s a vague promise about developing Windows and Android versions, too.

More ominously, the developers have also talked about unrolling a freemium version of the product when discussing future plans -- how (if at all) it’ll effect existing functionality isn’t yet clear. But given the app’s continual teething problems, it’s hopefully something that will wait until Polymail is firing on all cylinders and has run without major problems for a decent length of time.

Polymail for Mac 1.01 is available now as a freeware download for Macs running OS X (no minimum version information has been given), while Polymail for iOS 1.21 is also available free for iPhone, iPad and iPod touch users running iOS 8.2 or later.