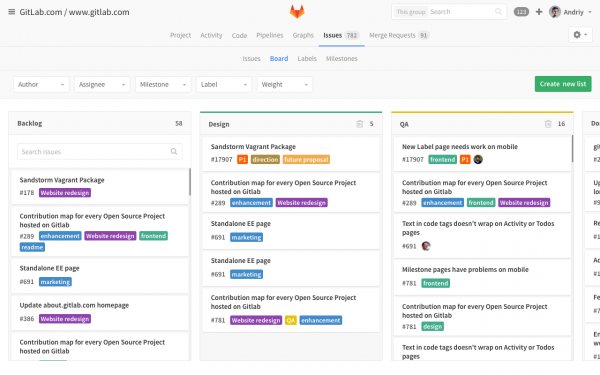 As the importance of software to almost all businesses has grown, so the competition to bring new releases to market and ensure they're error free is fierce.

Called Issue Board it allows developers to visualize and manage issues from within GitLab, streamlining the release and deployment process, and eliminating the need to use an external tool.

Free to all GitLab users, the Issue Board builds on GitLab's existing issue tracking functionality. Lists (or columns) represent each step in the development process, it starts with two lists: Backlog and Done, and uses can create up to 10 lists of their own.

Issues appear as cards on the Board and lists are aligned with user defined labels. These work with existing issues, so if you have things which are already labeled, 'Backend' and 'Frontend' for example, the corresponding issues will appear in the lists as you create them.

Issues can be moved between lists, the label on the issue automatically gets updated. This new label is displayed in the Issue Tracker as well as on the issue itself so even if someone on the team isn't checking the Issue Board they'll still have a record of what step an issue is on. Using GitLab's existing Label functionality means that filtering and sorting abilities are consistent across the product.

You can find out more on the GitLab website, and there’s a video giving an overview of how Issue Board works below.