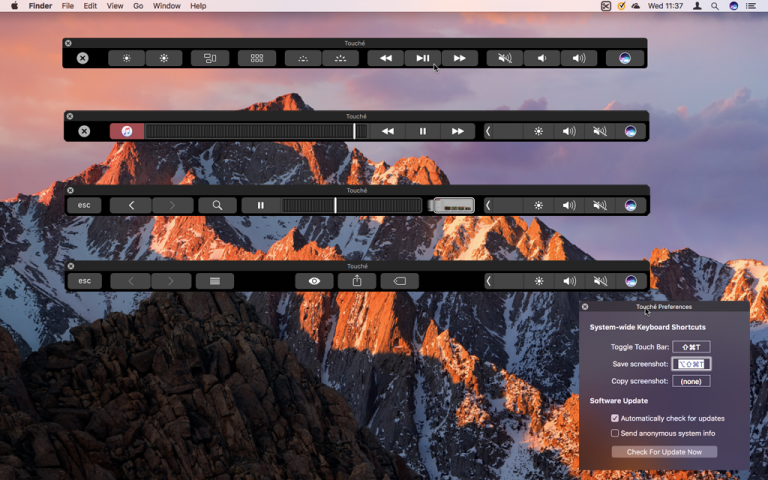 Apple’s Touch Bar is a major new selling point for its latest generation of MacBooks, but that doesn’t mean you have to purchase one to find out what it’s all about. Touché 1.0 is a new freeware tool that places a virtual Touch Bar on the desktop of any Mac running the very latest version of MacOS Sierra (10.12.1 v2 or later).

This isn’t an emulator, but a virtual copy of the Touch Bar itself, identical in every way to the hardware-based bar found on the latest MacBooks.

The feature is made possible because Apple provided a virtual simulator for developers to use in order to get a sense for how it works and how to test their own apps with it. The simulator requires Xcode, is fiddly to implement and difficult to screenshot, however.

Enter stage left, ex-Apple software engineer Daniel Jalkut. He’s developed Touché as a solution to all three problems described above, so it’s as relevant for developers as it is for home users who’d like to try out the Touch Bar on their existing Mac.

Download the zip, then drag the app file into your Applications folder, then launch it. If you get a message about your Mac not being fully up to date, click 'More info' and follow the prompts to obtain the latest version of macOS 10.12.1. Once installed and rebooted, the app should launch with no further issues.

You’ll see it appear at the bottom of your screen, immediately above the Dock (if it’s visible). You can click and drag it anywhere on-screen, then use the key combos (select Touché > Preferences to set your own) to hide/show the bar, plus save or copy screenshots of the Bar on demand.

Let’s reiterate: Touché is an exact duplicate of the actual Touch Bar, sporting the same controls, which are context-sensitive depending on whether supportive apps like Safari are running.

This is a brilliant, user-friendly implementation of Apple’s new Touch Bar, minus the price tag. If you’re planning on upgrading purely for the new Touch Bar feature, use this to familiarize yourself before you take the plunge -- you might even decide it’s a more cost-effective alternative. Touché 1.0.1 is available now as a freeware download for all Macs running macOS 10.12.1 (version 16B2657) or later.

2 Responses to Touché 1.0 extends Touch Bar functionality to any modern Mac -- for free