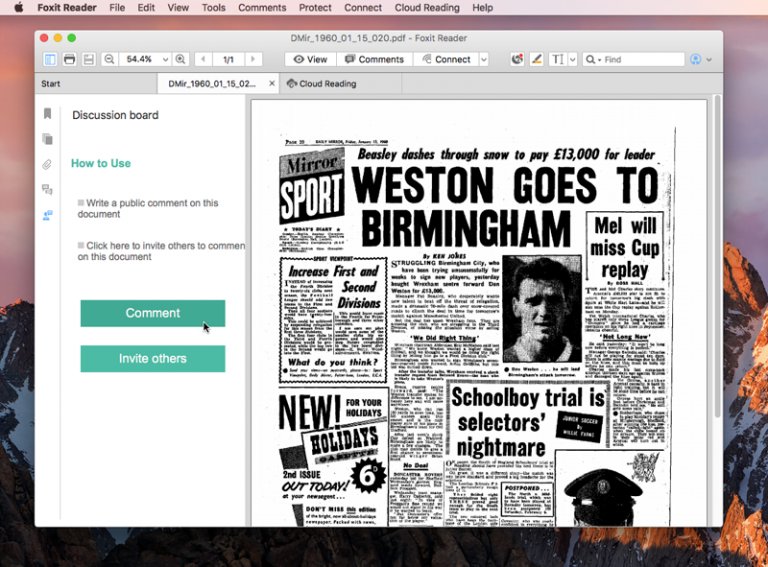 Foxit Software has released Foxit Reader 8.2, the latest point update of its free Windows PDF viewer and creation tool, alongside Foxit Reader for Mac/Linux 2.3. Both new versions introduces features for sharing comments and discussions and a cloud reading tool among other changes.

The Windows version is the more fully featured of the two, boasting numerous additional features including PDF creation capabilities and form filling tools, both of which have yet to be implemented on the Mac and Linux platforms.

Foxit Reader 8.2’s headline new feature allows users to post their opinions or ideas directly into PDF documents using the Discussion Board, which requires users to sign in using a ConnnectedPDF/Foxit Cloud account.The feature is joined by enhanced collaboration as part of Foxit’s Connected Review feature, providing a handy dashboard for reviewing all comment- and discussion-related activity.

Windows users also gain the ability to convert files into linearized PDF files with Fast Web View support, which basically means they can be opened and viewed while the full file is still being downloaded from the web.

There’s also a new Foxit Cloud Reading feature, which is designed to allow users to enjoy a seamless reading experience across multiple platforms and devices. Again, it works in conjunction with a Foxit Cloud account.

There’s also new ECM and Network Drive support, allowing users to preview non-PDF files across SharePoint and a range of cloud drives, including Google Drive, OneDrive and DropBox by automatically converting them to PDF.

Other changes include: new context-sensitive help tools with a ‘Tell me more’ link to go straight to the relevant help center article, and support for converting XPS files to PDF format. There are also a number of security fixes.

The release is joined by Foxit Reader for Mac and Linux 2.3. This release offers a subset of the features found in the Windows version. Version 2.3 gains two of of 8.2’s new features: the discussion and comments tools, and Cloud Reading feature respectively.

Version 2.3 also implements support for the PDF Tools add-on, which provides automation and batch-processing features, plus gives users the option of printing only odd or even pages.