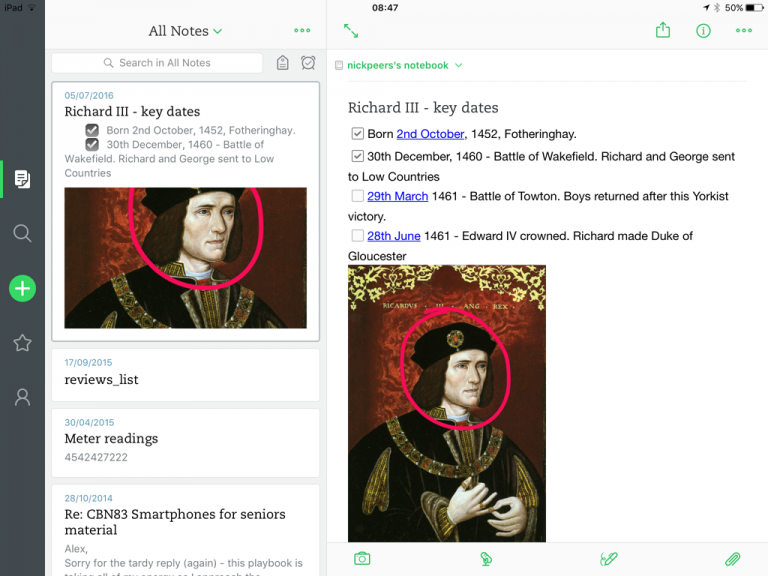 If this were a TV show or movie franchise it would be a reboot. After a period of behind-the-scenes consolidation and soul-searching, Evernote Corporation has signaled a new approach to its note-taking tool with the release of Evernote for iOS 8.0.

Version 8.0 sees the cluttered green interface of yesteryear banished, replaced by a more minimalist design as Evernote attempts to reposition its note-taking app with speed and user-friendliness at its core.

The most obvious change is the simpler user interface. The home screen has been removed so users begin at the recent notes screen. There are now just five icons on the left giving users easy access to notes, search, shortcuts and account settings, plus a handy one-tap button for creating a new note from scratch.

The one-tap create button works two ways -- a short tap opens a new text note, or users can tap and hold to bring up a pop-up giving options for creating audio, photo or reminder-based notes.

Navigation has been made simpler too -- not only do users start where they left off, but they can also easily switch notebooks by tapping the "All Notes" shortcut at the top of the screen. Options for displaying notes can be found here too.

Those notes organized by tag or reminder are also more accessible thanks to two filters next to the Search bar -- one for filtering by tag, the other for showing only tags with reminders attached.

Finally, Evernote for Business customers gain a clearer division between professional and personal accounts, and can quickly switch between the two by long-pressing the Account button.

Although the changes appear superficial, there are clear benefits in terms of user-friendly navigation and speedy responsiveness. It’s also the first release to make use of Evernote’s Project Honeybee, which sees apps across all platforms share common code to make future releases simpler to implement. With this in mind, expect other Evernote apps to unveil similar redesigns over the coming weeks and months.

Evernote for iOS 8.0 is available now as a free download for iPad, iPhone and iPod touch users running iOS 9.3 or later. Basic user subscriptions are limited to two devices and 60MB of new uploads per month. Plus and Premium plans are also available.