GameRoom is an all-in-one game launcher for Windows 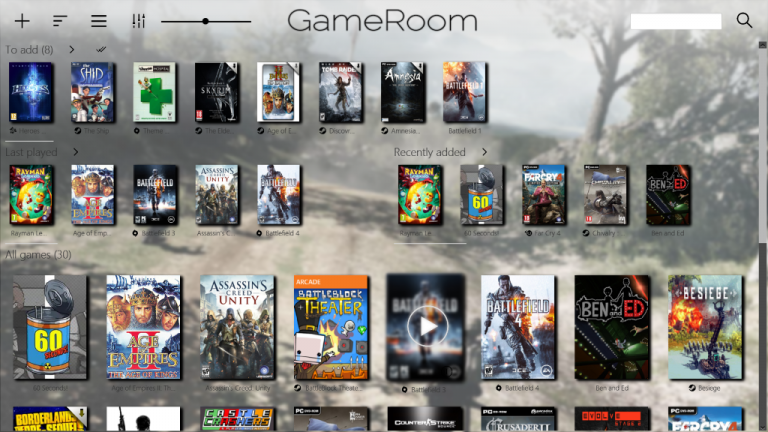 GameRoom is a Java-based game manager and launcher with support for Steam, Origin, UPlay, GOG and Battle.net.

The program finds and imports your existing games automatically, no setup or folder selections required, then downloads and displays their cover art.

GameRoom even lists Steam games you’ve purchased but not installed, and can kick-start the download process for you (it’s still managed by the Steam downloader).

The program accesses IGDB and other sources to collect game covers, background images, and details including genre, release date, theme, series and more.

Large and friendly buttons enable grouping and sorting your games by most of these fields. GameRoom also tracks playing time, and you’re able to view and sort by that figure, too.

It’s not just about automation -- there are manual controls and fine-tuning tweaks, too. You’re able to remove games from the library display (but not your system) with an "Ignore" option. Other games may be added manually, and you’re able to specify a folder to monitor for new games.

An "Enable Gaming Power Mode" allows specifying a Windows power plan to use when a game is launched. If you’re on a laptop and normally use Power Saver, for instance, you could use this to temporarily switch to High Performance for the best possible gaming speeds.

GameRoom can also run specified commands before a game is launched, and after it’s been closed (select Settings > General and check Advanced Mode to make this and other tools available). This could be a handy way to automate any common pre-launch or cleanup tasks, such as automatically closing all your browser windows to free up RAM.

There are plenty of similar tools around, and as GameRoom’s still in beta it’ll probably have some bugs. But it’s a likeable program, entirely free with no adware or other catches, and if you’re interested in game launchers then it’s worth a closer look.

GameRoom is a free Java-based program for Windows 7 and later.