No fracking way! Fukishima is worse than ever 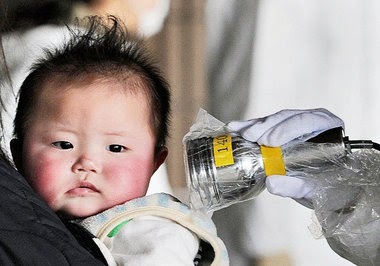 Remember the Fukishima Daiichi nuclear accident following the 2011 earthquake and tsunami in Japan? I wrote about it at the time, here, here, here, here, and here, explaining that the accident was far worse than the public was being told and that it would take many decades -- if ever -- for the site to recover.

Well it’s six years later and, if anything, the Fukushima situation is even worse. Far from being over, the nuclear meltdown is continuing, the public health nightmare increasing. Why aren’t we reading about this everywhere? Trump is so much more interesting, I guess.

"The radiation levels inside Japan’s damaged Fukushima Daiichi nuclear reactor No. 2 have soared in recent weeks, reaching a maximum of 530 sieverts per hour, a number experts have called 'unimaginable'."

That’s the most recent evidence. Click on it and you’ll find the original story underneath. What this means is there’s a puddle of molten uranium that has melted its way through the steel pressure vessel, through the reinforced concrete containment, through the reinforced concrete foundation of the nuclear facility, and is now working its way through whatever rock or soil lies underneath the foundation, dropping lower each day.

The danger here isn’t that molten uranium will make its way to the opposite side of the world because that’s impossible. Liquid uranium won’t flow uphill, so the furthest it could go is the center of the Earth’s core, which is probably a great place for nuclear disposal. The real problem is that these next hundreds or thousands of feet for the uranium to drop could well facilitate the transfer of radiation and radioactive materials into the environment. This is right by the sea, remember, where radioactive cooling water has been released continuously for six years already. If the molten uranium hits an underground aquifer, such a spread could get even worse.

Just in case you didn’t bother to read any of those old column links above, here’s why I am writing about this subject and why you should take me seriously. Back in 1979 I was hired by the White House to help investigate the nuclear accident at Three Mile Island. My friend Robert Bishop, whom I consulted for this column, was the only American at Chernobyl.

There is no solution to the Fukishima problem, but there are a few things that can be done to mitigate this crisis, with the main one being what’s being called an ice wall, which you may have read about.

Liquid nitrogen is pumped underground to freeze a ring of soil around the power plant. The idea isn’t to somehow cool the molten uranium because that has its own source of heat that will last for a century or more. The point of the ice wall is to contain the poison while also minimizing incursion of water. Starve the puddle of water, the idea goes, and just let the uranium do its thing. Water is bad not just because it might carry radiation and radioactive materials away from the site and into the environment, water is bad because the uranium’s heat will turn it into hydrogen and oxygen which will then explode.

Why worry about such subterranean explosions? Think of it as fracking. Just as fracking uses explosions to release trapped natural gas, Fukishima-style fracking will fill the fractured rocks and their entrapped water with radioactivity.

Here’s the important bit: These new radiation numbers show the uranium puddle is on the move, downward -- ever downward. To be even minimally effective the ice wall has to go preferably deeper than the puddle.

While the ice wall technique has been well publicized, its required depth hasn’t been.

I’ll guarantee you right here that the ice wall doesn’t go deeper -- not even close -- because that would cost more than the Japanese utility and government are willing to pay.

I’ll also guarantee you that 99.9 percent of the Japanese population doesn’t understand this danger.

27 Responses to No fracking way! Fukishima is worse than ever