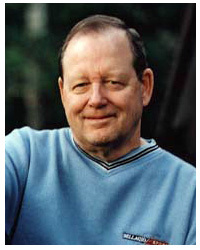 Bob Taylor, who far more than Al Gore had a claim to being the Father of the Internet, died from complications of Parkinson’s Disease last Thursday at 85. Though I knew him for 30 years, I can’t say I knew Bob well but we always got along and I think he liked me. Certainly I respected him for being that rarity -- a non-technical person who could inspire and lead technical teams. He was in a way a kinder, gentler Steve Jobs.

At DARPA in the 1960s Taylor was in charge of a budget to support computing at major research universities. Computing in those days meant mainframes and every school wanted one. But there was only so much money to go around so Bob looked for a way for universities to share mainframes by networking them together. This was the ARPAnet, predecessor to today’s Internet.

Sharing batch processing mainframes in the punched card era bears little similarity to what we think of as the Internet today. And the story that’s often told of the ARPAnet as some Cold War command and control system is just as wrong. But ultimately the ARPAnet became all that and more because Taylor didn’t demand to control its evolution. This was a key contribution.

Another key contribution was the succession plan Taylor created in his little part of DARPA. Even after he left the agency his influence continued for two decades through the efforts of people he had hired. Larry Roberts, Bob Kahn and Vint Cerf each ran the office in turn. All were exactly the technologists that Taylor wasn’t, yet in one way or another he brought them all into the operation. So while Bob Taylor appears to have had nothing to do with TCP/IP, it can be just as easily argued that he made the protocol inevitable.

Taylor left DARPA for XEROX in 1970, charged with staffing the Computer Science Lab at the new Palo Alto Research Center (PARC). Admittedly about half of his work involved simply hiring-away the best people he could get from Doug Engelbart’s team at the Stanford Research Institute. At one point a bitter Engelbart claimed to me that 43 ex-SRI folks were working for Taylor at PARC. But what he did there was much more than just hiring: Taylor helped to establish at PARC the environment that made possible many of the computing advancements of today.

The way this was done was by deliberately living 10 years in the future when it came to technology. XEROX wanted to understand the office of the future and for a company that slow-moving the future meant about a decade away. While keeping your eye on that horizon might not seem like a big task it actually is if you take into account the impact of Moore’s Law: if computing power doubles every 18 months then creating the computing environment of 10 years in the future required making everything 64 times as powerful, which generally cost at least 64 times as much, too. It was a huge expense but the results included local area networking, Ethernet, graphical computing, WYSIWYG, page description and object oriented languages (remote procedure calls!) and, of course, the laser printer.

Bob Taylor was one of the guys who had to defend that 64X budget. He also ordered PARC’s famous beanbag chairs.

When chinks began to appear in XEROX PARC’s bureaucratic armor, Taylor in 1984 took most of his lab across town to Digital’s System Research Laboratory where the fun continued for another decade. The most notable company to emerge from SRL was Alta-Vista, the Internet’s first search engine.

Over 30 years Bob Taylor -- a psychologist -- took the world from isolated mainframes running batch jobs to thousands of servers indexing the World Wide Web. His contribution to the Internet we know today was huge.