Kiwi for Gmail 2.0 arrives on Windows, runs Google services in a desktop app 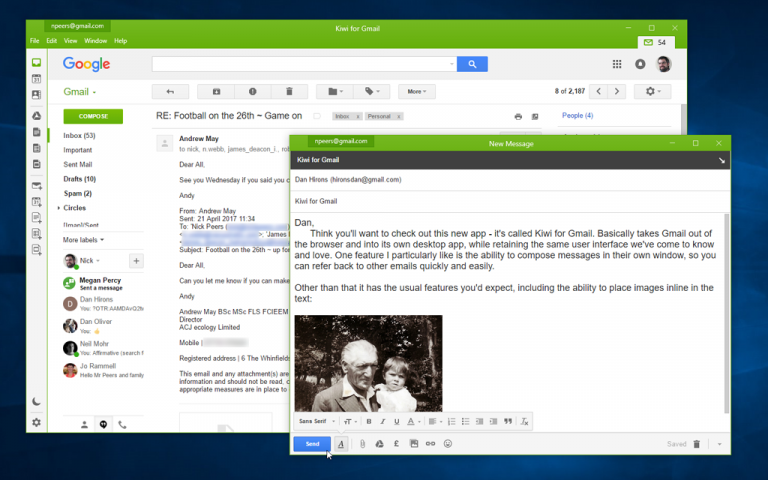 Zive, Inc has released Kiwi for Gmail 2.0 for PC users, migrating its popular Mac tool of the same name to the Windows platform.

Kiwi for Gmail will appeal to those Google aficionados who are currently accessing Google services -- primarily Gmail (including mail, calendar and contacts), but also Google’s G-Suite office apps -- through their web browser.

Kiwi for Gmail provides users with a desktop client for accessing a single Gmail account at no cost. The program also includes a Premium subscription (currently $9.99 a year) that lets users connect up to six accounts within the same program (all color-coded and via separate tabs), along with separate windows for G-Suite apps (Docs, Sheets and Slides) and Google Drive.

The app doesn’t attempt to reinvent the wheel -- users will instantly recognize a similar user interface to that found in their web browser. That said, the app does have some handy tricks up its sleeve, most notably the ability to compose new messages in a separate window.

Users also gain the ability to access calendar and contacts in separate windows too, using the shortcut icons down the left-hand side of the app.

Kiwi for Gmail installs as a 30-day trial of the Premium version, at the end of which the app reverts to Kiwi for Gmail Lite, which works solely with Gmail (mail, contacts and calendar), and is limited to a single Google account.

The Premium version, which costs $9.99 a year for Windows users, allows users to connect up to six Google accounts within the app, and also integrates Google Drive and the G-Suite family of apps: Docs, Sheets and Slides.

Again, apps run in their own windows, providing users with something closer to Microsoft Office in look and feel. Desktop shortcuts for all three apps are also created during installation, allowing users to pin these elsewhere for convenient access.

Other key features found in the Premium version include global keyboard shortcuts for composing mail without leaving the current app. Two features exclusive (for now) to this new Windows release are the ability to configure "important-only" notifications, plus a "Zen Switch". This is the equivalent of your mobile’s Do Not Disturb feature that disables all notifications – just click the crescent moon icon in the left-hand bar to switch it on and off.

Mac versions of both -- including Kiwi for Gmail Lite -- are available through the Mac App Store. Note Mac users can purchase the Premium version for a one-off cost of $9.99.

One Response to Kiwi for Gmail 2.0 arrives on Windows, runs Google services in a desktop app