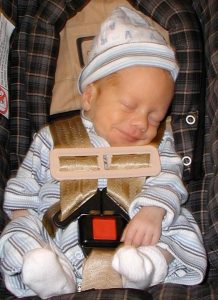 It was 15 years ago this week that my son Chase Cringely died of Sudden Infant Death Syndrome (SIDS) at age 74 days. I wrote about it at the time and there was a great outpouring of support from readers. Back then, before the advent of social media, parents didn’t get a chance to grieve in print the way Mary Alyce and I did. We shed a light on SIDS and, for a couple years, even led to some progress in combating the condition, which still kills about 4,000 American babies each year.

When you lose a child, especially one who dies in your lap, as Chase did with me, you can just curl up and die yourself or you can try to fix the problem. With the help of readers all over the world I tried and failed to build a practical SIDS warning device with the idea of not curing SIDS, but avoiding it. You see the syndrome only lasts for about 11 months, from age 1 month to one year. And while events such as Chase’s can’t be made not to happen, with proper detection and the simplest of alarms the baby can be literally roused out of death.

Alas, in 2002, while we knew what we were looking for, the cost of a proper warning device was just too high for the market to bear at that time. We used ex-KGB biometric monitoring technology that worked but pretty much required a PC (or a hefty FPGA) to work and the market definitely wasn’t ready to pay for that. And don’t get me started on the FDA, which was useless.

But times have changed and I realized tonight talking about it with my surviving children that we’re now in an era where a cloud SIDS alarm is really possible. I’m too old to build one so I’m going to tell you how to do it if you want to carry that torch.

I think the perfect platform for a cloud SIDS alarm is a $49.99 Amazon Echo Dot virtual assistant. I suspect an unmodified Dot would do the job, though it requires running a SIDS Alexa app that has yet to be written.

The goal of the alarm is to monitor the sleeping baby’s heart, detect a SIDS event, then set off a very loud alarm to rouse the baby because waking Mama often doesn’t work. So the Dot will be listening for the baby’s heart, monitoring its pattern, then blasting a loud noise if SIDS is detected. I know I just wrote pretty much the same thing twice but the sequence is that important.

Don’t use this Dot for anything except as a SIDS alarm. If you want it to play lullabies or act as a regular baby monitor, then buy another Dot for that. Place the SIDS Dot UNDER the crib, upside down attached to the mattress with velcro. Though the heartbeat sound has to go through the mattress to the Dot, it’s often quieter under there and sometimes the mattress springs will sympathetically vibrate, making detection easier.

We have to increase the accuracy of the microphones in the Dot. The technique is to use all seven microphones individually to detect the heartbeat, comparing them to each other and sampling over a sliding window of 5-6 seconds of time to properly identify the right sound. A software band-pass filter might help, too. This process is essentially an audio version of what’s called "super-resolution" in video processing. We want to isolate that little heart and really listen to it.

Now you’d think that detecting SIDS once you can hear the heart would be as simple as setting-off the alarm whenever you no longer can hear it. Nope, that won’t work. Maybe, instead of the baby dying, it’s just been moved to the changing table. You don’t want to set off a 120 dB siren every time you change a diaper!

Fortunately there’s an easier way to detect SIDS, but you have to know what you are listening for. The American SIDS Institute (today in Naples, Florida, but in our day it was in Marietta, Georgia), has an audio library of SIDS deaths that actually happened while on a heart monitor. Remember what I said about parents being too tired to hear the alarm? Sadly the Institute has quite a selection of SIDS deaths to choose from and analysis of those deaths shows there is a characteristic slowing of the heart prior to a SIDS death. In every case the pattern (the rate of deceleration) is the same and the result is that death can almost always be predicted several minutes before it actually happens. That’s plenty of time to intervene, IF you know to do so.

So the Dot listens not just for the baby’s heart but especially for that characteristic slowing pattern. Only then does the loud alarm go off. And with the Dot right under the baby, that should be enough to save the day.

Now somebody go out and build that app!

Chase would thank you. I thank you, too.