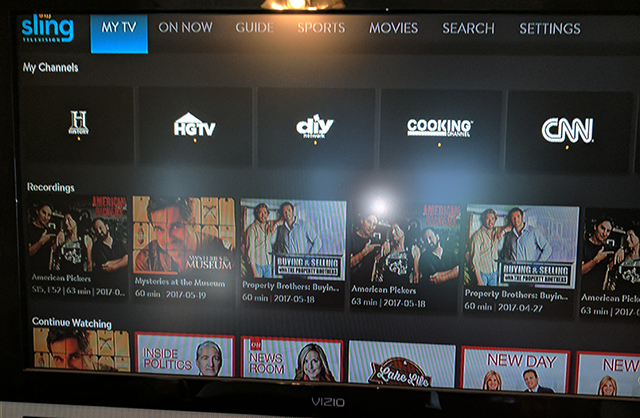 The digital video recorder has been around for quite a while now and it revolutionized home media. The way we watch TV completely changed when we no longer had to pop in a blank tape and manually plan our recordings. Now we just set a show to record whenever it happens to be on.

Sling has been rolling out a cloud DVR over the past couple of months, and I've been using it since it arrived -- so, around two months or so. I'd like to give you a bit of the ups and downs from my experience.

First, your shows are listed under the My TV option at the left of the top menu. Go there and you'll see what's been recorded in the middle menu. You can begin scrolling right through each one and choose what you wish to watch. That is fairly simple, as is recording.

To record, simply click on a show and choose your preference -- there's "just this episode", "new episodes only" or "all episodes."

Now we'll get to the caveats. Two shows I have set for Sundays have been recording, but didn't this week even though they were new episodes. I haven't figured out why and they have not yet appeared in "on-demand". If I scroll to an upcoming episode and click it still says it's set to record, with an option to cancel as well. The second thing is that it does add $5 to your monthly bill, which really isn't too bad.

If you have the Sling service then I still recommend trying it, but don't set your expectation level too terribly high. There are some glitches to iron out.