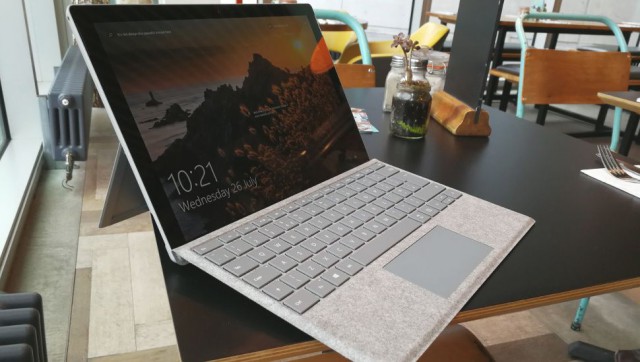 Microsoft sent shockwaves around the technology world back in 2013 when it released the first edition of its Surface Pro. As its first computing release, the device was a bold change by a company best known for its software, but the success of this initial model, and the three successive releases, have proved it to be a shrewd idea.

Released last month, the latest edition of the Surface Pro has dropped the model number seen in previous generations, meaning this product goes back to basics when it comes to naming, however when it comes to what's inside, the device has received a welcome upgrade.

The new Surface Pro may look similar to previous generations, but Microsoft has included a new, larger battery inside that it says provides a major improvement in battery life, as well as upgrading the processors within.

So will this new power-packed, battery-safe device finally prove the key to Microsoft's battle with Apple's MacBooks (as well as the growing number of Windows-powered devices) in the lightweight business laptop market? 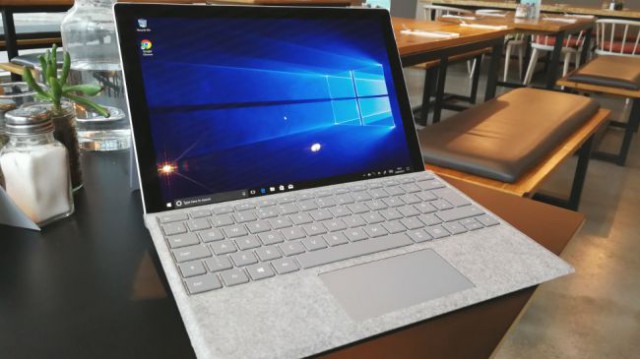 Microsoft has established a definite style when it comes to the Surface Pro line of devices, so it's perhaps no surprise that not much has changed with this latest device.

Users of past Surface devices might struggle to spot differences to the previous device, the Surface Pro 4, with the new edition keeping the same 12.3-inch PixelSense touchscreen, sporting a 2,736 x 1,824-pixel resolution.

However the new Surface Pro features a slightly more rounded design on its corners, with the magnesium-aluminum alloy frame now less likely to pick up bumps and scrapes if carried around in a bag.

The new Surface Pro also measures in at the same 0.33 inches (8.4mm) of thickness as the previous device, as well as matching its 1.73 pounds (786g) weight -- an impressive feat when you consider this device packs a battery that is supposedly 20 percent larger.

The device is also more flexible than previous generations thank to a more mobile kickstand, which can now stretch back even further to transform into "Studio Mode," which allows a top-down view that should mean better collaboration.

However Microsoft has also launched a number of all-new Type Cover keyboards to go with its latest design, offering a stylish way to quickly turn the Surface Pro into a fully interactive work device.

Our version came with the light gray "Alcantara" style fabric keyboard, which when matched with the light gray rear panel of the Surface Pro was a stylish addition to the device, and definitely one that will stand out. Connecting via a magnetic port, the keyboard quickly clips on the to main device, and is removed just as easily too -- a real boost when out and about. Typing was smooth and responsive, and the fabric feel of the Alcantara keyboard was comfortable to use for long periods of time, and proves a useful alternative to the standard plastic devices.

The new Surface Pro is Microsoft's most advanced model yet, so it's no surprise to see that the device is equipped with some rather useful specs.

This put our unit solidly at the lower end of the potential specifications for the new device, which is also available with Intel Kaby Lake Core m3 and Core i7 CPUs, up to 1TB of storage and 16GB RAM.

Despite this, the device was quick to start up, and rarely showed any signs of sluggishness, even when coping with multiple programs, juggling workplace apps alongside media and instant messaging without slowing down.

The battery in the new device has been Microsoft's headline feature, and with good reason. The company quoted a battery life of around 13.5 hours, which our tests found fairly accurate, even following a full day's work use. Recharging is quick and painless, although the device still uses Microsoft's own magnetic charger, which can sometimes be quite fiddly to attach.

Unlike the Surface Pro 4, however, the new device does not come with the Surface Pen accessory included, meaning you'll need to shell out $99.99 for the newest version of the stylus.

Elsewhere, the new Surface Pro comes with a single USB 3.0 port, which seems fairly underwhelming (although Wi-Fi and Bluetooth connectivity comes as standard) as well as a Mini DisplayPort connector to hook the device up to an external monitor. All in all, this is a device that is meant to stand out on its own, then quickly be connected to outside extras when needed. 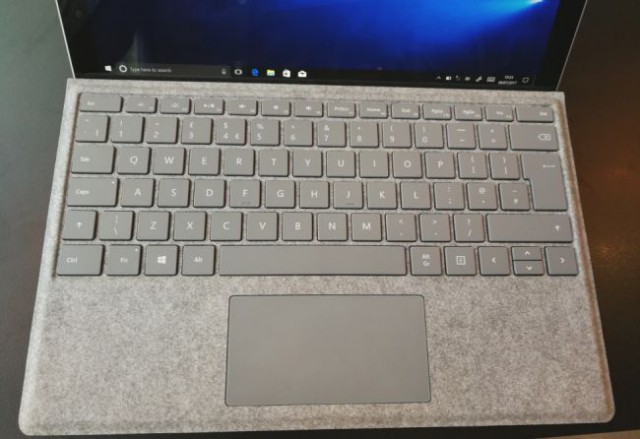 The Surface Pro has been designed to act as an easy-to-use device that is as much at home in the boardroom as in your living room, and luckily it succeeds in both.

Setting up the device is brilliantly easy, with existing Microsoft account holders able to jump in right away.

Our edition of the Surface Pro came packing a 64-bit version of Windows 10 Pro, meaning that all your favorite apps and services are available, but still required a quick manual update to download all the latest Microsoft upgrades.

As mentioned above, the CPU and other hardware meant that the device never showed any signs of slowing down during use, and comfortably made it through a full work day without any battery worries.

The touchscreen was responsive to our input, even when using a pen as a makeshift stylus, with the Surface Pro switching to "tablet mode" when you disconnect the Type Cover. Using the Alcantara companion was smooth and easy to set up, however the device did feel somewhat unstable when typing on anything that wasn't a flat, hard surface (such as using whilst on your lap), moving around when in use quite alarmingly.

Overall, using the Surface Pro was comfortable and straightforward, whether in the office or out and about -- and the lightweight design and portability mean that this really is a device you can just pick up and take wherever you need it to be.

The new Surface Pro is Microsoft's most powerful hybrid device to date -- and doubtlessly also its best.

The company has clearly learnt from past models of the device to craft something which is easy to use and beautiful to look at. The battery life improvement removes what for many people was the biggest downside to the previous generations, with the new Surface Pro comfortably lasting for a full work day.

However the device also remains a great product to use, with easy set up and usability, as well as looking fantastic and offering excellent portability. The only downside is a slightly wobbly keyboard, and a lack of ports -- although these are fairly minor points.

In the end, if you're looking for a lightweight, powerful and mobile working device, and want to steer clear of Apple's devices, there really is no better alternative to the new Surface Pro.