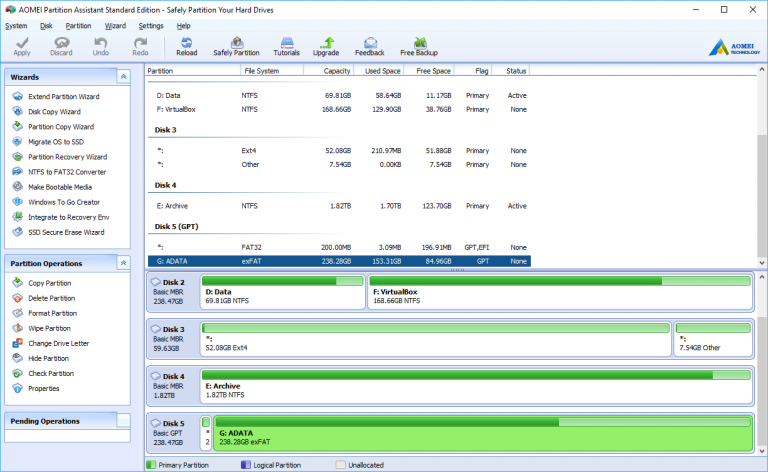 Everyone needs a partition management tool. Windows ships with its own limited tool, accessible under Disk Management, but it’s restricted in a number of key areas, not least its inability to move files to help with the repartitioning process.

AOMEI has just released a major update to its free partitioning tool: Partition Assistant Standard 6.6. It’s become our go-to partition editor, and version 6.6 makes it even more compelling than ever.

Version 6.6’s headline new feature is partial support for the exFAT file system -- now users can create, delete, format, move and copy exFAT partitions alongside other supported formats, including NTFS, FAT/FAT32 and EXT2/EXT3. Resizing is not (yet) supported.

One final change is that the limitation for resizing or moving the system boot partition in Windows 10 (version 1703 or later) has been removed.

This limitation -- which only applied when resizing under Windows environments (as opposed to the Windows PE environment) -- had been introduced in version 6.5, released back in August. That release also introduced a new 'SSD Secure Erase Wizard', which can revert SSD drives to their factory state.

What makes Partition Assistant Standard stand out among the plethora of other free partition managers such as MiniTool Partition Wizard Free and EaseUS Partition Master Free? The crucial factor is its current feature set.

First, there’s the ability to create bootable rescue media -- an essential step as partitioning can (and does) go wrong -- there’s an extra bonus point for being able to integrate its tools into your current recovery partition too.

You’ve then got wizards for all manner of partitioning tasks, with useful extras such as NTFS to FAT32 converter and partition recovery as well as a wizard for migrating your OS from a traditional hard drive to a new, faster SSD. Throw in tools for converting between GPT and MBR (and back again), and practically all bases are covered.

Long story short, if you’re looking for the most fully functional partitioning tool without cost, then AOMEI Partition Assistant Standard 6.6 is currently our tool of choice. It runs on all versions of Windows from XP to 10.