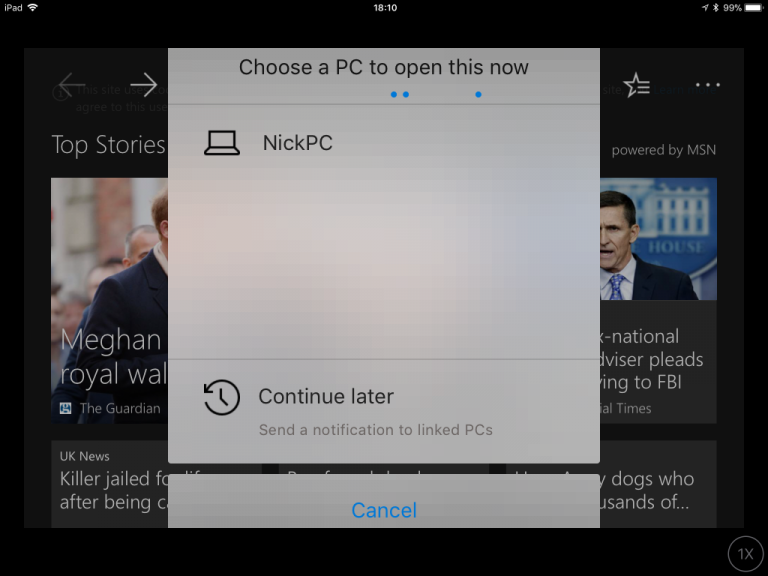 Microsoft has launched the first stable version of its web browser for mobile with the release of Edge for iOS 1.0 and Edge for Android 1.0.

Both browsers are targeted at Windows users who have Edge as their default -- the primary purpose of both is to allow users to sync settings and content between desktop and mobile, following a similar path trodden by the likes of Chrome and Firefox.

To those wondering if this represents a misguided assault on the mobile browser market by Microsoft, the answer is -- of course -- no. Edge exists for iOS and Android primarily because most Windows users possess one or other mobile device, and it allows them to stay in sync between their computer, phone and tablet.

One major caveat -- while the app can be installed on any compatible phone or tablet, it’s designed primarily for phones. The display is not optimized for tablets, and it appears you need a cellular phone to receive a text to link devices; however, this isn’t strictly true, meaning your Wi-Fi tablet can also be linked.

Your target PC also needs to be running the latest Fall Creator’s Update -- then it’s a case of visiting Settings > Phone on the PC to enable the sync features.

These include a handy button that can instantly transfer the currently viewed page to any linked device -- phone, desktop PC or back again. A "Continue later" option allows users to transfer pages without being at their desk.

Other synced settings include favorites, history and any passwords stored in Edge as well as other relevant settings.

New features added to the final release include roaming passwords -- allowing users to save passwords on their phone, which then follow them across to their PC. Support for the desktop Dark theme has also been added to the mobile app for those who want it.

There’s currently a limited set of languages supported: both iOS and Android versions work on English (US and UK), Simplified Chinese and French, while the Android version also supports English (Australia, Canada and India) and French (Canada). Other markets will follow.