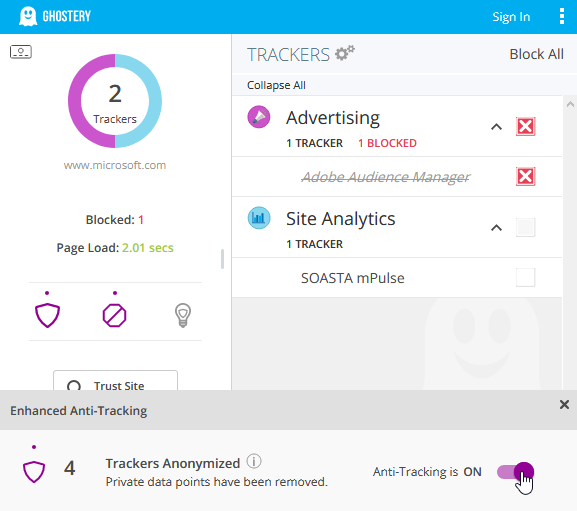 Cliqz has released Ghostery 8.0 for Chrome, as well as updates for Firefox and Opera users. The extension provides protection against tracking technologies and intrusive ads to boost browser privacy.

Version 8.0 implements a new heuristic approach to antitracking and ad-blocking, allowing the extension to protect user data based on behavior rather than relying exclusively on a known blocklist. The blocklist feature remains, and is joined by a simplified user interface as well as a handful of new advanced features to keep both novices and experienced users happy.

In practical terms, this means that the protection will overwrite any identifiable data that’s passed to a third party, even if the tracker in question isn’t in the current blocklist.

Accompanying these enhanced features is a new Smart Blocking tool, which has the aim of speeding up websites through automatically blocking and unblocking trackers.

The Smart Blocking feature is part of a three-pronged attempt to make Ghostery more user-friendly. The second is switching on the three enhanced and new features by default to immediately provide a cleaner, safer and quicker browsing performance.

The final prong sees the add-on revamped to make it simpler to use. New users gain a simplified setup process, while everyone can now switch on a "Simple View" by clicking the button in the top left-corner of the Ghostery extension.

More advanced users haven’t been forgotten: there’s a new option to expand the Detail View in the extension UI, a snooze function for the Pause button and the promise of new dashboards to come -- these are currently displayed grayed out and with a lock icon at the bottom of the main window.