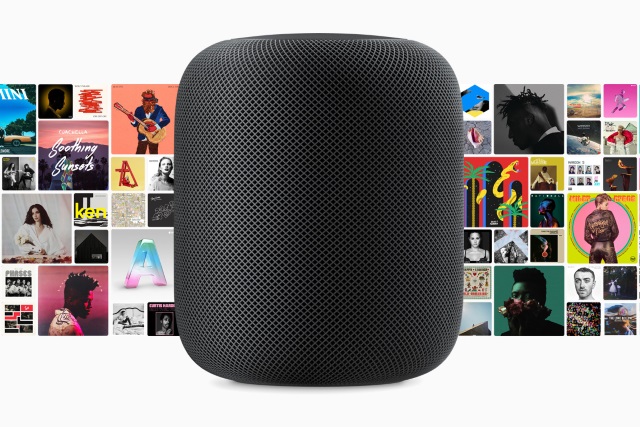 Pre-orders for Apple's eagerly anticipated smart speaker -- the HomePod -- start in just a few days' time. Today the iPhone-maker announces that the HomePod will launch on February 9, but you can pre-order from Friday January 26.

The smart speaker will be available in the US, UK and Australia first of all, and springtime will see it launch in France and Germany. The voice-controlled HomePod had been planned for 2017, but was delayed before Christmas. Now Apple is finally ready to offer a premium alternative to the likes of the Amazon Echo and Google Home, with the company placing a firm emphasis on not just the familiarity of Siri, but also audio quality.

Apple explains that the HomePod can be used to not only listen to music, but also send messages, set reminders, and control smart HomeKit devices. The speaker is powered by Apple's A8 chip and measures 7 inches in height. The company says that it uses "real-time acoustic modeling," "audio beam-forming" and "spatial awareness" to optimize sound no matter where it is placed in a room. Apple highlights how easy HomePod is to set up, saying that it is as simple as getting AirPods up and running.

Philip Schiller waxes lyrical about the capabilities of the smart speaker:

HomePod is a magical new music experience from Apple. It brings advanced audio technologies like beam-forming tweeters, a high-excursion woofer and automatic spatial awareness, together with the entire Apple Music catalog and the latest Siri intelligence, in a simple, beautiful design that is so much fun to use. We’re so excited for people to get HomePod into their homes, apartments and businesses to hear it for themselves. We think they will be blown away by the audio quality. The team has worked to give Siri a deeper knowledge of music so that you can ask to play virtually anything from your personal favorites to the latest chart-topping releases, simply by saying "Hey Siri."

A software update is already planned for later in the year which will allow for multiroom audio -- or stereo sound -- for anyone with multiple HomePods. Apple points out additional capabilities of the speaker, saying:

HomePod is a convenient way to send messages, set timers and reminders, check the weather and listen to shows on Apple Podcasts. The latest business news, headlines and sports updates stream directly to HomePod from NPR, CNN, ESPN and others. HomePod can also be used as a speakerphone with iPhone for crisp and clear audio quality.

With support for HomeKit, HomePod can control hundreds of home accessories or set scenes like, "Hey Siri, I'm home," to control a number of different accessories at the same time. HomePod can turn on the lights, raise the shades, set the desired temperature or make other adjustments and serves as the perfect home hub, enabling remote access and automations.

The HomePod will cost $349 in the US and it can be bought from Apple Stores and at select Apple Authorized Resellers, including Best Buy in the US. In the UK, it will be available from Argos, Dixons Carphone (Currys PC World), John Lewis, Shop Direct (Very and Littlewoods), EE and Apple Premium Resellers.

Find out more at the HomePod web page.