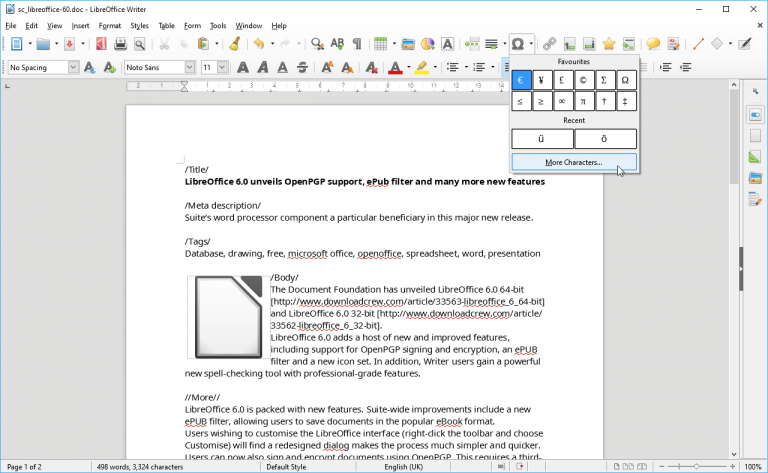 LibreOffice 6.0 adds a host of new and improved features, including support for OpenPGP signing and encryption, an ePUB filter and a new icon set. In addition, Writer users gain a powerful new spell-checking tool with professional-grade features.

LibreOffice 6.0 is packed with new features. Suite-wide improvements include a new ePub filter, allowing users to save documents in the popular eBook format.

Users wishing to customize the LibreOffice interface (right-click the toolbar and choose Customize) will find a redesigned dialog makes the process much simpler and quicker.

Documents can now be signed using OpenPGP. This requires a third-party PGP tool, such as Gpg4win. Writer users can even sign individual paragraphs.

When users come to save modified images from documents, they’ll be alerted to the fact it’s been modified in LibreOffice and given the choice between saving the original or modified version.

The toolbars themselves have been spruced up with the addition of a new icon set -- Elementary -- which offers a cleaner look. LibreOffice 6.0 also ships with the open-source Noto Sans font included.

The Help system has also been overhauled to be more accessible and work across mobile devices properly.

A new Form menu simplifies the addition of interactive elements such as buttons and boxes to documents, while users gain the ability to use data from tables inside Writer documents as the source for a mail merge.

Users can now rotate images incrementally using the new Rotation Angle tool instead of being restricted to 90-degree steps.

Navigation via the Find toolbar is made simpler thanks to a drop-down list of selectable elements for targeted searches. The custom dictionary has also been overhauled with new grammatical features aimed at professional writers.

Calc users gain the ability to export cell ranges to a file and make more flexible selections of cells, while Impress adds 10 new templates and sets the default aspect ratio for new presentations to 16:9.