Is it time to consider Emsisoft Anti-Malware 2018? 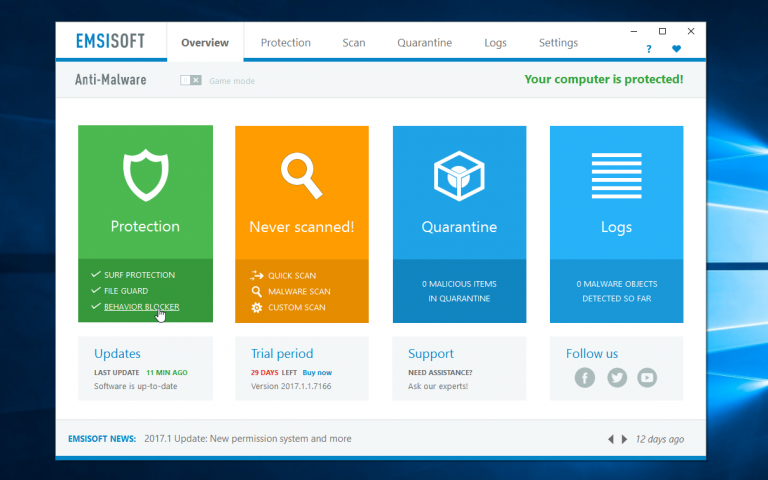 There’s so much negative press about 'mature' security software from the likes of Kaspersky, maybe it’s time to consider an alternative? And it’s not limited to Kaspersky. Brands such as Norton have been questioned recently by allowing Russian authorities to examine source code for potential backdoors.

In our experience, people avoid change and often only seek an alternative when their system (somewhat ironically) is compromised. Little do people know that they are actually fewer daily threats than they realize, unless you spend the day downloading dodgy software or looking at rogue websites, your everyday computing experience will be trouble-free.

With this in mind, most people tend to think their security is protecting their computer, so avoid looking for other options. Actually, it’s often doing nothing at all. Apart from annoyingly flagging up false-positives.

However, this doesn’t mean there aren’t better alternatives. One favorable US brand is Malwarebytes. Traditionally, this was used as a second layer 'backup' scan for many, on top of their existing security software, but it has migrated into a fully-fledged security suite. But even Malwarebytes can run into issues, such as the CPU bug last weekend. People don’t quickly forgive security companies when they cause system issues.

So, is it time to consider another alternative? Austrian company, Emsisoft develop what we regard as a very compelling security suite, Anti-Malware 2018. Although this was also originally marketed as a second-layer security, it also has migrated in to a fully-fledged standalone suite, powered by two engines, combining the power of Bitdefender’s award-winning engine with Emsisoft’s own.

Emsisoft flags up Anti-Malware as having all the tools required to protect a PC in 2018. For instance, the two engines enable Anti-Malware to focus on both checking for the latest daily threats, whilst at the same time making sure your system avoids unwanted software. You’ll find real-time protection, an anti-ransomware guard, hourly updates, ultra-fast scans and even an anti-malware guarantee where experts will fix your computer for you if, for any reason, Anti-Malware misses a new threat.

Last, but not least, Emsisoft Anti-Malware scores highly in many recent roundups, including the December 2017 AV-Comparatives test, where it received the top Advanced+ rating. We hope Emsisoft focuses a little harder on false-positives, however.

Emsisoft Anti-Malware 2018.1 is available now. Go download yourself and see how it compares to your existing security.