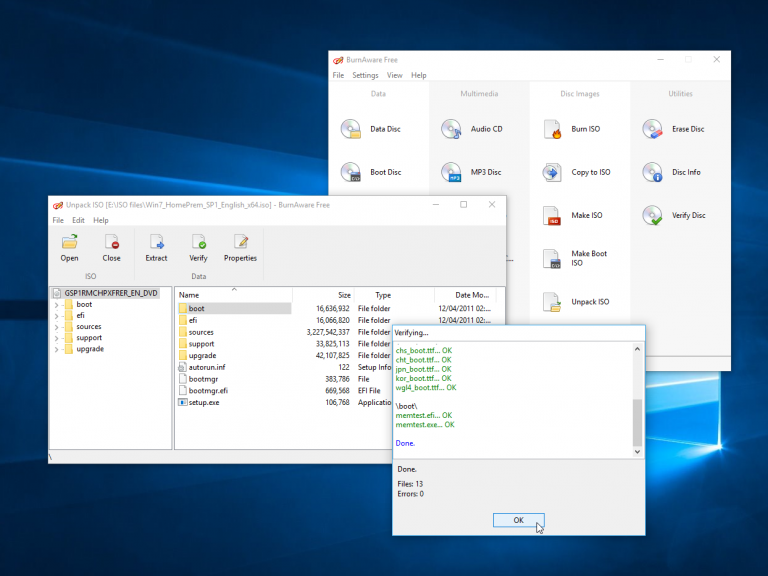 Version 11’s new headline feature is the addition of a tool to view and extract files from ISO images. It’s accompanied by an option to associate ISO files with BurnAware as well as support for incorporating HD audio tracks into compact disc compilations.

Users will find the new Unpack ISO tool available in the Disc Images section of the program interface. Clicking this opens a File Explorer-like window, where users can open an ISO image to browse, verify and extract individual files or folders using the controls supplied.

Accompanying this new feature is an option to associate ISO files with Burnaware, so users can access the tool simply by double-clicking a file.

Also added is support for including HD audio tracks in audio CD compilations, as well as hotkeys for play and stop buttons. Users also gain the option of continuing to use the original disc name for new sessions on multi-session discs.

The program comes with the promise of performance and stability improvements -- bug fixes include resolutions for cancelling disc recordings in multi-disc compilations and keeping the value of the "Number of copies" option.

BurnAware 11.0 Free is a freeware download for PCs running Windows XP or later. It supports disc burning, image creation and burning plus disc copying to images.

Users wanting direct disc-to-disc copying, audio track extraction and file recovery capabilities should look at BurnAware 11.0 Premium instead, which costs $19.95 for a license with one year’s free upgrades. Also available is BurnAware 11.0 Professional, which costs $39.95 and also offers multi-burn support from ISO images as well as allowing commercial usage.