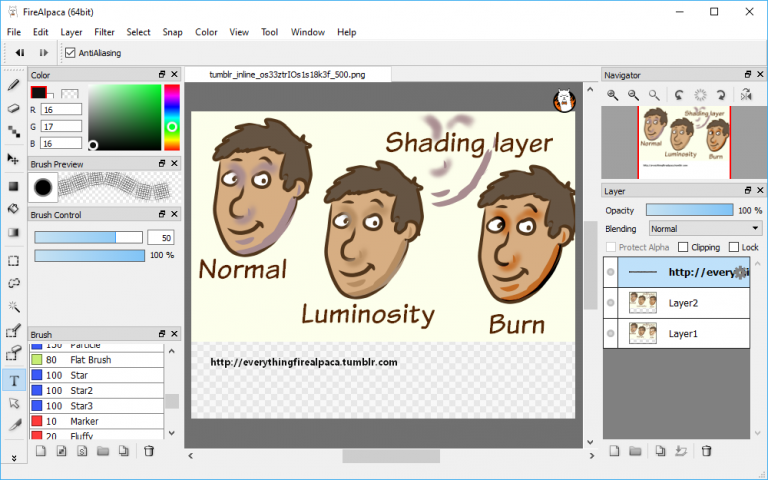 Japanese developer PGN Inc has released FireAlpaca 2.0, a major new release of its free paint app for Windows and Mac users. The app is aimed at wannabe painters with a variety of drawing tools coupled with advanced features such as layer support.

Version 2.0’s headline new feature is the addition of a separate 64-bit build for Windows PCs, but it also improves its layer support along with some minor tweaks and adjustments.

FireAlpaca provides users with a blank canvas on which to draw using a wide range of brushes, pens and filters. Support for layers makes it possible to build up complex paintings, while there are a series of perspective tools and the ability to snap to 3D objects such as a cube.

There are also tools aimed firmly at comic book artists, such as built-in panel layouts and templates, and the program is infinitely configurable with support for professional hardware such as pressure-sensitive tablets and styluses.

Version 2 introduces a new 64-bit Windows build, which is now the default download choice. Layer support has been enhanced by allowing users to select multiple layers at once by holding down the Shift key when clicking on each layer. The selection can then be inverted by holding Ctrl and clicking on a single layer.

A new layer folder function has also been added, making it easy to organize multiple layers in groups.

Minor improvements include a fix for the error plaguing the Hue filter. Users also gain the ability to turn off prior and post frames when in Onion Skin Mode.

The saving and reading of the program’s own MDP file format has also been improved for better stability.

FireAlpaca 2.0 is now available as a freeware download for PCs running Windows Vista or later, as well as Macs running OS X 10.7 (Lion) or later. Visit the Everything FireAlpaca page for help and advice using the program.