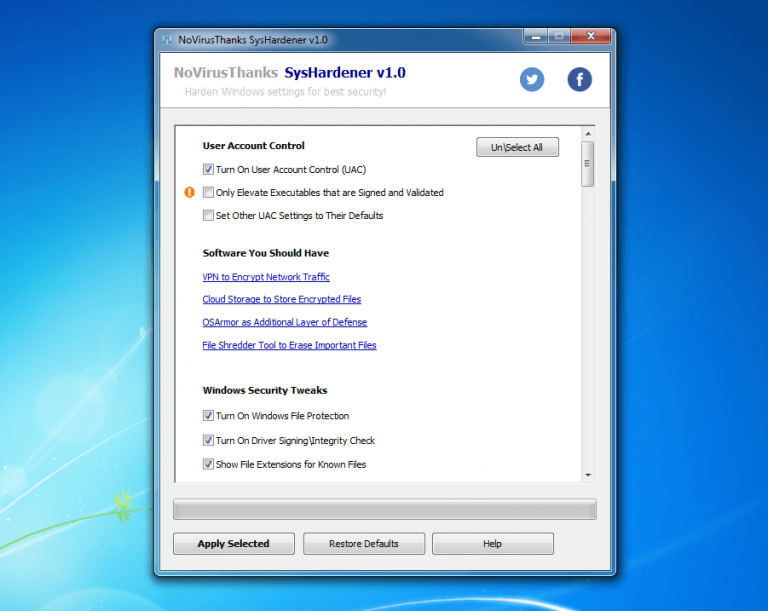 Most users seem to think Windows is locked down after installation, where it makes it almost impossible for anyone to gain access to your computer. It’s only after you install malicious software are security concerns raised, but these are typically intercepted by third-party security software.

Problem is Windows ships with a middle ground configuration where it is forced to compromise between security and compliance. As an example, the geolocation service is switched on by default so applications can determine where you are located. For the security conscious, users might not want to allow applications to know where they are.

Alternatively, you might want to switch off file associations, so a rogue application cannot execute code or turn off User Account Control.

SysHardener is a brand new free tool which lists every possible security concern or function, within one user-interface, then enables you to either switch them on or off, as required. When you first open the application, a number of functions are listed and can be toggled at a flick of the switch.

One issue we notice is that there’s barely any help or explanation for each toggle. SysHardener does throw up a warning exclamation mark to the left of the toggle if it thinks the function is in use (geolocation or Bluetooth are two examples) or shouldn’t be switched off. Apart from this, you are on your own figuring what each security toggle offers, so it’s clearly designed for advanced users.

SysHardener is very similar to the free O&O ShutUp 10, designed for Windows 10 users only. O&O ShutUp 10 does offer a number recommendations and is slightly better designed, too, so perhaps a better choice for novice users (although not for Windows 7 or 8 users).

Download SysHardener. There’s a separate SysHardener Portable which can run without installation.