We win, you lose: How shareholder value screwed the middle class 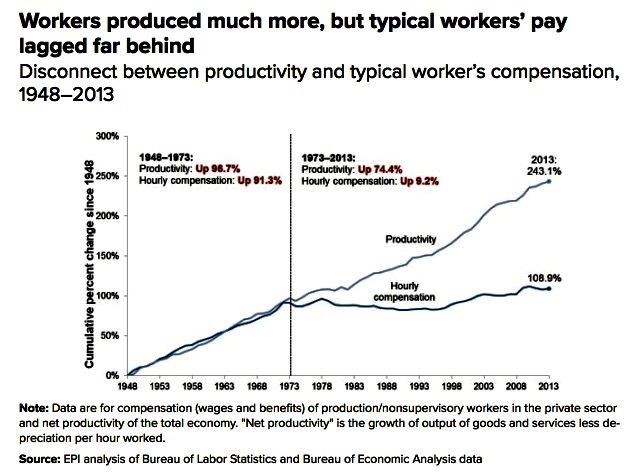 The American Dream changed somehow in the 1970s when real wages for most of us began to stagnate when corrected for inflation and worker age. My best financial year ever was 2000 -- 18 years ago -- when was yours? This wasn’t a matter of productivity, either: workers were more productive every year, we just stopped being rewarded for it. There are many explanations of how this sad fact came to be and I am sure it’s a problem with several causes. But this column concerns one factor that generally isn’t touched-on by labor economists -- Wall Street greed.

Lawyers arguing in court present legal theories -- their ideas of how the world and the law intersect, and why this should mean their client is right and the other side is wrong. Proof of one legal theory over another comes in the form of a verdict or court decision. As a culture we have many theories about institutions and behaviors that aren’t so clear-cut in their validity tests (no courtroom, no jury) yet we cling to these theories to feel better about the ways we have chosen to live our lives. In American business, especially, one key theory is that the purpose of corporate enterprise is to "maximize shareholder value." Some take this even further and claim that such value maximization is the only reason a corporation exists. Watch CNBC or Fox Business News long enough and you’ll begin to believe this is God’s truth, but it’s not. It’s just a theory.

It’s not even a very old theory, in fact, and only dates back to 1976. That’s when Michael Jensen and William Meckling of the University of Rochester published a paper, "Theory of the Firm: Managerial Behavior, Agency Costs and Ownership Structure" in The Journal of Financial Economics. Their theory, in a nutshell, was that there was an inherent conflict in business between owners (shareholders) and managers, and that this conflict had to be resolved in favor of the owners, who after all owned the business; and the best way to do that was to find a way to align those interests by linking managerial compensation to owner success. Link executive compensation primarily to the stock price, the economists argued, and this terrible conflict would be resolved, making business somehow, well, better.

This idea appears to be more of a solution in search of a problem. If the CEO is driving the company into bankruptcy or spends too much money on his own perks, for example, the previous theory of business (and the company bylaws) said shareholders could vote the bum out. But that’s so mundane, so imprecise for economists who see a chance to elegantly align interests and make the system work smoothly and automatically. The only problem is the alignment of interests suggested by Jensen and Meckling works just as well -- maybe even better -- if management just cooks the books and lies. And so shareholder value maximization gave us companies like Enron (Jeffrey Skilling in prison), Tyco International (Dennis Kozlowski in prison), and WorldCom (Bernie Ebbers in prison).

The Jensen and Meckling paper shook the corporate world because it presented a reason to pay executives more -- a lot more -- if they made the stock rise. Not if they made a better product, cured a disease, or helped defeat a national enemy. All they had to do was make their stock go up. Through the 1960s and 1970s, average CEO compensation in America per dollar of corporate earnings had gone down 33 percent as companies became more efficient at making money. But now there was a (dubious) reason for compensation to go up, up, up, which it has done consistently for 40+ years, until now when we think this is the way the corporate world is supposed to work -- even its raison d’etre.

But in that same time real corporate performance has gone down. The average rate of return on invested capital for public companies in the United States is a quarter of what it was in 1965. Sure, productivity has gone up, but that can be done through automation or by beating more work out of employees (more on that later). Jensen and Meckling created the very problem they purported to solve -- a problem that really hadn’t existed in the first place.

Maximizing shareholder return dropped the compounded rate of return on the S&P 500 from 7.5 percent annually from 1933-76, to 6.5 percent annually from 1977 to today. That one percent may not look like much, but from the point of view of the lady at the bank the loss of so much compound interest may well have led to our malaise of today. Profits are high—but are they real? Stocks are high -- but few investors, managers, or workers are really happy or secure.

Maximizing shareholder return is bad policy both for public companies and for our society in general. That’s what Jack Welch told the Financial Times in 2009, once Welch was safely out of the day-to-day earnings grind at General Electric: "On the face of it," said Welch, "shareholder value is the dumbest idea in the world. Shareholder value is a result, not a strategy… your main constituencies are your employees, your customers, and your products. Managers and investors should not set share-price increases as their overarching goal. … Short-term profits should be allied with an increase in the long-term value of a company."

Tell that to Sam Palmisano at IBM, who, in 2005, and then again in 2010, set corporate goals for earnings-per-share, which is to say he set a target price for IBM stock based on historical price-to-earnings ratios, as one of his signature goals for the company. And he was applauded for it.

"…the dumbest idea in the world," Jack Welch said. Remember that.

I didn’t come up with this idea that shareholder earnings maximization should not be the prime corporate motivator. It came from Roger Martin, former dean of the Rotman School of Management at the University of Toronto, only 169 miles from Rochester where this nonsense began. Martin’s very good book is Fixing the Game: Bubbles, Crashes, and What Capitalism Can Learn from the NFL. Here’s how Martin put it: "Imagine an NFL coach holding a press conference on Wednesday to announce that he predicts a win by nine points on Sunday, and that bettors should recognize that the current spread of six points is too low. Or picture the team’s quarterback standing up in the post-game press conference and apologizing for having only won by three points when the final betting spread was nine points in his team’s favor. While it’s laughable to imagine coaches or quarterbacks doing so, CEOs are expected to do both of these things."

Once corporate America embraced the idea that all their main purpose was to maximize shareholder value that lead to distortions in nearly every part of nearly every business. Anything that could be seen as a drag on earnings could be cut with impunity. This included employee pay and benefits. So pay stagnated while pensions and health care were cut. This helped the company but hurt the market since every worker is also a consumer. Businesses moved to cheaper places of doing business, sometimes overseas. Research and development was cut and cut again as if there was no longer a connection between developing new technology and company success. There were exceptions of course, but the trend was clear, marginalizing workers, hurting the overall economy and the society it supports. And all for an underlying reason that wasn’t even true.