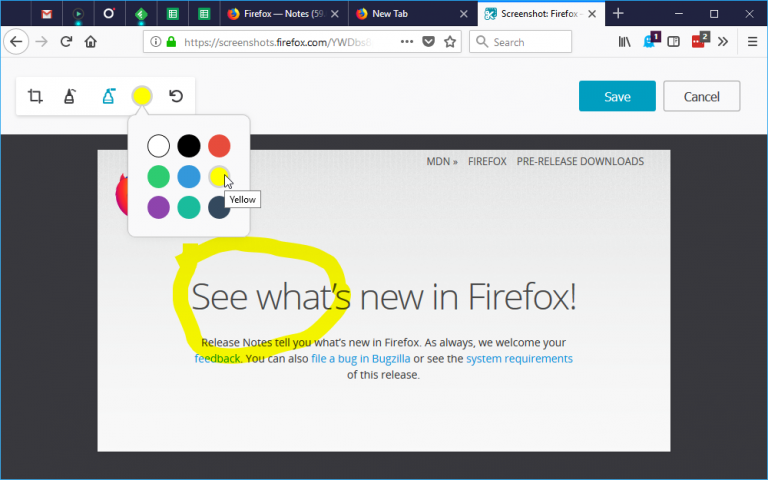 Mozilla has released Firefox Quantum 59.0 for desktop, along with Firefox for Android 59.0 rolling out imminently.

The new version continues to refine performance with the promise of faster page-loading times, while the Home page gains one new customizable feature. Other highlights include improvements to the built-in screenshots tool and the ability to block website requests for advanced access or notifications.

Firefox’s new Home page gains an additional customization feature as of this release: users can now drag and drop entries within the Top Site list to rearrange them.

The built-in Firefox Screenshots tool also continues to evolve -- users gain basic annotation capabilities in the form of Pen and Highlighter tools, while images can be re-cropped after saving. This functionality is actually handled by the server-side part of the Firefox Screenshots tool, so is also available to all versions of Firefox (56 onwards) that support the tool.

Two notable tweaks have been added to Firefox’s options: the first is an option to prioritize search suggestions over browsing history in the address bar under Search settings.

The second feature is designed to rein in the increasingly intrusive nature of some websites. It’s buried away under Options > Privacy & Security > Permissions -- click the appropriate Settings button next to Location, Camera, Microphone or Notifications to prevent websites asking for access. Existing permissions remain unaffected and can also be tweaked from this location.

Elsewhere, Firefox’s Real-Time Communications (RTC) capabilities have been improved, including the introduction of features designed to support large-scale conferences.

Performance improvements can be found in the promise of faster loading times for content on the Firefox Home page. A new 'Race Cache With Network' feature also boosts loading page times by choosing the faster loading option from either the user’s locally stored cache or Firefox’s networked cache.

Firefox Quantum 59.0 is available now as a free, open-source download for supported versions of Windows, Mac and Linux. Firefox for Android 59.0 is due imminently.