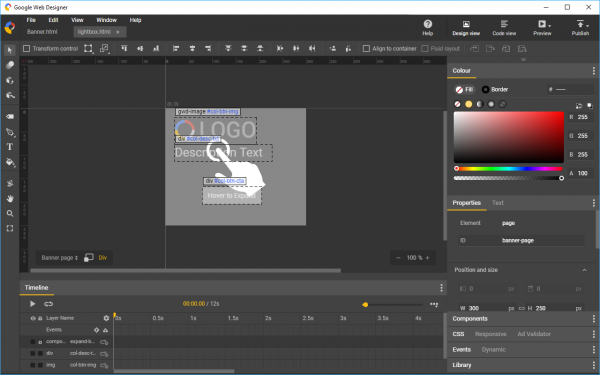 Google has released Google Web Designer 3.0 Beta, its HTML5 content-producing tool for Windows, Mac and Linux. Although targeted primarily at advertisers, the tool can be adapted for other content too, and also supports JavaScript, CSS and XML.

Users also gain the ability to quickly add components to the centre of the stage simply by double-clicking them in the Components panel.

A new component for including interactive 3D models has been added for beta usage -- for now, only a limited number of users will be able to serve ads using the component.The Properties panel has been improved to allow users to browse their file system for image and video sources, while a Help panel (choose Help > Help center > Help panel) makes it possible to view help articles within the main program window.

A number of performance improvements have also been implemented, including a fix for several issues involving the timeline and Quick mode.

In total, 24 issues have been fixed -- see the release notes for a full list. Notable beneficiaries of fixes including the Timeline, Workspace (both Panels and UI), CSS panel. The article includes details of a wide number of known issues, once again highlighting the tool’s permanent beta status.

Although Google Web Designer is primarily geared towards advertisers wishing to build multi-platform content (including event-based animated content) in CSS, Javascript and XML, the tool can be steered towards other uses via the File > New menu, bypassing the templates to create content from scratch. It aims to be user-friendly through the use of syntax highlighting, code autocompletion and the ability to switch between visual and coding interfaces.