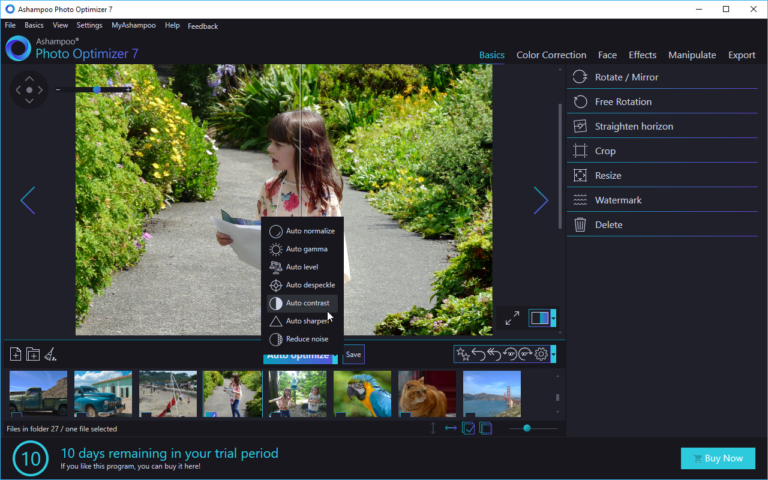 Highlights include a complete user interface redesign -- including new dark theme look to accompany the growing number of apps sporting the eye-friendly look, "greatly improved" optimization tools and various other tweaks and improvements.

Version 6, which was followed by a cut-down free version (Ashampoo Photo Optimizer 2016, no longer available), opened with the promise of better one-click optimization, and Photo Optimizer 7 repeats the claim -- with almost four years of development time behind it, the new algorithm claims more in-depth analysis.

Specific improvements include better correction of pale, washed-out colors from digital’s tendency towards colder, bluer hues, plus the ability to correct exposure and unsuitable color temperatures.

The program is also now able to incorporate white balance correction and contrast spread into its one-click tool.

Ashampoo is keen to stress how its automatic correction tool is guided and improved with feedback from over 5,000 Ashampoo customers who provide ratings for enhancements to guide future development.

The program also unveils an overhauled user interface. Aside from giving it a modern look to better complement Windows 10, the program has been restructured with the promise that any function is now no more than two clicks away. This has been achieved in part by removing all nested menus.

A dark theme has also been implemented to reduce eye strain.

Finally, the program offers a wide range of image export options, from email and free online storage to desktop backgrounds and prints.

Ashampoo Photo Optimizer 7 is available now as a free trial download for PCs running Windows 7 or later. The full version retails for $39.95, but can currently be purchased for $19.99. Existing users can upgrade for $9.99.