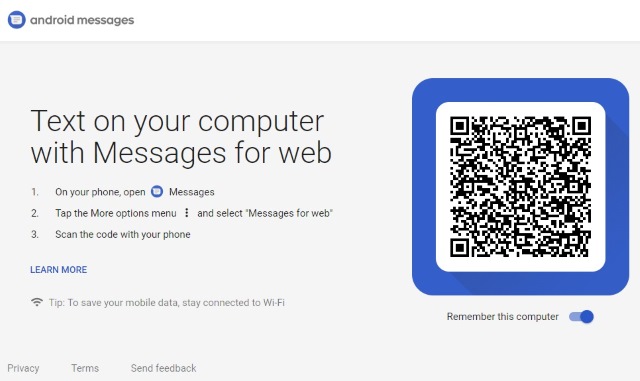 Google is rolling out a series of changes to Android Messages, one of which makes it possible to send text messages from the comfort of your computer. Called "Messages for web" the feature enables users to use a desktop web browser to send SMSes rather than their phone.

While this is almost certainly the biggest and most exciting changes for Messages, Google is also pushing a number of other new features to the app, including Smart Replies, GIF search and link previews.

The ability to send text messages from your computer is something that Google has been talking about for some time now, and it is finally becoming a reality for Android users. The company has updated its messages.android.com portal with a QR code and instructions for getting started with computer-based text messages.

But this is just one of five new Messages features Google highlights in a blog post.

The other four are: GIF searching as found in other apps such as Facebook Messenger, Smart Reply as found in Gmail, inline link preview so you can see what the URL you send to people will look like, and a new password-copying feature.

To get you start with the text-from-your-computer service, Google offers up the following instructions which you can use at messages.android.com:

Text on your computer with Messages for web

Not everyone is currently able to see the "Messages for web" option in the app, so it's clear that tis is something of a staged rollout. Be patient, though -- it's on its way!