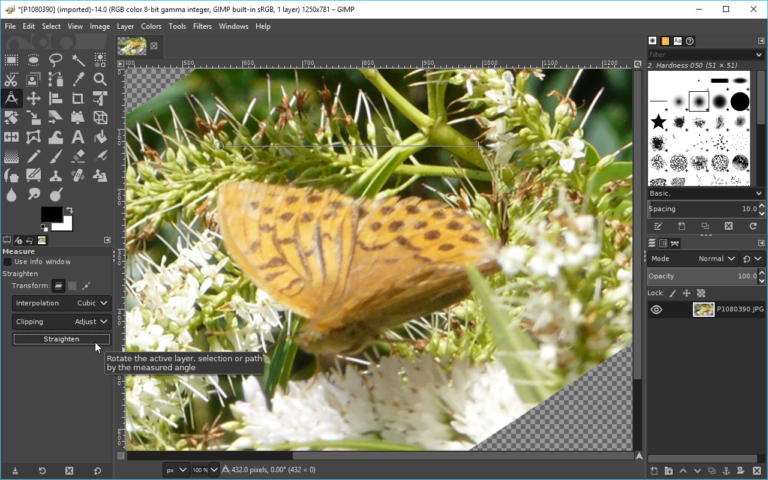 Popular open-source image-editing tool GIMP 2.10.4 has been released by the GIMP Development Team. The latest version of the popular cross-platform image editor adds a new Simple Horizon Straightening tool to its feature complement.

Performance is improved thanks to asynchronous loading of fonts on startup, while macOS users can rejoice: official builds for OS X have been restored.

The Simple Horizon Straightening feature has been added to GIMP’s Measure tool. Measure is frequently used to calculate the angle of rotation on uneven photos using the horizon as a guide -- now a newly added Straighten button automatically rotates the image by the measurement made.

The asynchronous font loading process means fonts now load in a parallel process. This means when the font cache has to be rebuilt through the addition or removal of fonts, it doesn’t slow down GIMP’s start-up times.

Note the font loading process still needs to be complete before users can use the Text tool, but GIMP will warn them if it’s still ongoing.

Another font-related tweak sees users able to now tag fonts in the same way they can tag brushes, patterns and gradients. For now tags must be manually added, but users are encouraged to help develop a tool that can automatically generate tags from font metadata.

The dockable Dashboard dialog gains a new Memory group of widgets, so users can monitor memory usage, while the Swap widget includes read and written fields for total data usage.

Other changes include a new Photoshop image (merged) function, which adds support for loading "merged", pre-composited PSD files. macOS users will also be pleased to see that GIMP 2.10.4 is now available for download.

Other improvements include support for simultaneous application of multiple transformations, a new Selective Hue-Saturation tool is available in the workshop and a Threshold setting to the newly renamed Sharpen (Unsharp Mask) filter. The update is rounded off by other minor improvements and bug fixes.

GIMP 2.10.4 is available now as a free, open-source download for Windows, Linux and Mac.