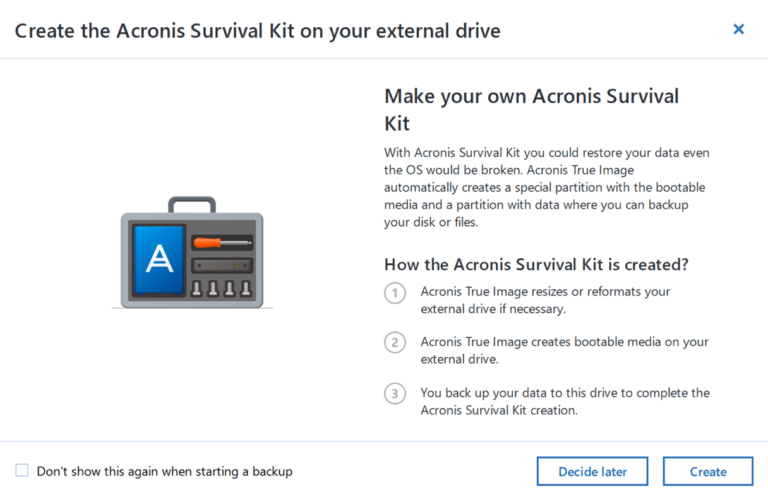 Acronis has launched Acronis True Image 2019 for Windows and Mac, a major new release of its popular local and cloud backup tool.

Acronis True Image 2019 opens with a new recovery tool: the Acronis Survival Toolkit. It brings together boot media, system partition and all the user’s backups on a single drive. Recovery is then a simple case of plugging in the drive and booting from it.

Elsewhere, a new backup cleanup tool allows users to free up drive space by removing unnecessary versions of a backup and deleting files no longer required.

The program’s cloud backup portion has also been tweaked, with a new file-to-cloud formatting scheme that Acronis promises increases both reliability and performance of backups.

Mac users gain a new Active Disk Cloning function, making it possible to upgrade to a larger or faster drive by creating an exact replica of the drive while it’s in use. Users can also create a bootable clone of the drive on an external drive for disaster recovery purposes -- Bootcamp is fully supported.

Acronis continues to tighten its integration with the Mac virtualization tool Parallels Desktop -- the latest version of the latter sees Acronis 2019 use a native API to back up virtual machines, allowing them to be recovered as a set of files bootable in a Parallels Desktop environment.

Other minor changes include the ability to create an event-based schedule for backups that start whenever a user inserts their USB backup drive. The WinPE rescue media is improved to allow for system recovery through both Ethernet and Wi-Fi connections.

Finally, the program’s anti-ransomware technology, which protects user data from ransomware encryption, has been extended to also protect data on network drives and share.

Acronis TrueImage 2019 is available now as a free trial download for PCs running Windows XP, 7 or later as well as Macs running macOS 10.11 or later. Prices start from $49.99 for a one-time purchase, or $49.99 for a single year’s subscription, which includes access to free cloud backup features.