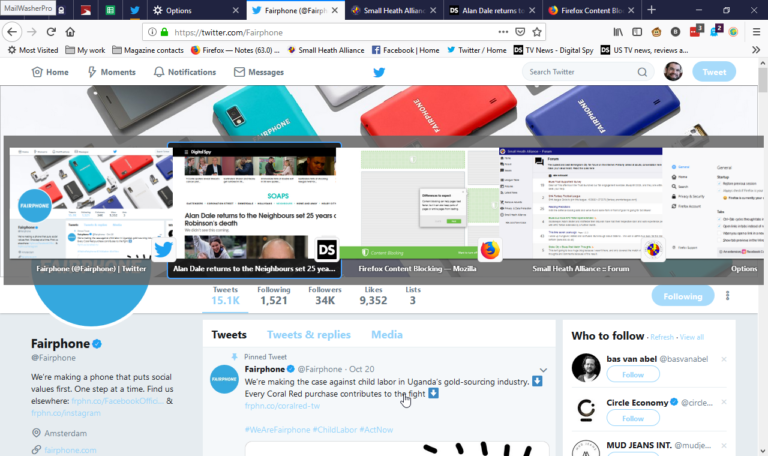 Mozilla has released Firefox Quantum 63.0 for desktop, along with Firefox for Android 63.0.

Like the previous release there are no major highlights to report, but both Windows and Mac users will be encouraged to update thanks to the promise of performance improvements. The Windows build will also change theme to match Light and Dark modes in Windows 10.

Performance benefits vary according to platform: the Windows build infrastructure has been moved to the Clang toolchain, which Mozilla describes as bringing "important performance gains" to the browser.

Mac users gain the promise of improved reactivity and faster tab switching. The WebGL power preferences now permit non-critical apps and applets to use the low-power GPU in multi-GPU macOS systems to save power.

Functionality changes include a warning now appearing when attempting to close the browser with multiple windows or tabs open when quitting from the main menu. Also, the Ctrl + Tab shortcut now shows thumbnail previews of each tab, cycling through them in recently used order -- users control this behavior via Options > General > Tabs.

US users also gain search shortcuts for Amazon and Google, which appear as Top Sites tiles in the Firefox Home page -- selecting either changes focus to the address bar to initiate a search.

Two features have been removed in Firefox 63: the ‘Open in Sidebar’ feature for individual bookmarks has been dropped, while users can no longer disable updates via about:preferences; instead, a policy template must be applied.

An issue that prevented the address bar from automatically filling bookmarked URLs in specific circumstances has been fixed, while WebExtensions will now run in their own process on Linux machines.

Firefox Quantum 63.0 and Firefox for Android 63.0 are both available now as a free, open-source download for supported versions of Windows, Mac, Linux and Android. The Android build has added English from Canada (en-CA) and Ligurian locales.